I love one pickup/one knob guitars, I love 25.5" scales for drop C, I love Killswitch and it just seemed like a good fit. I've been low key eyeing this thing for about 4 years, stars aligned and combined with a 1 year anniversary bonus at my job, it showed up a couple days ago.

Black guitars fuckin suck to photograph but that's why we're all here right? 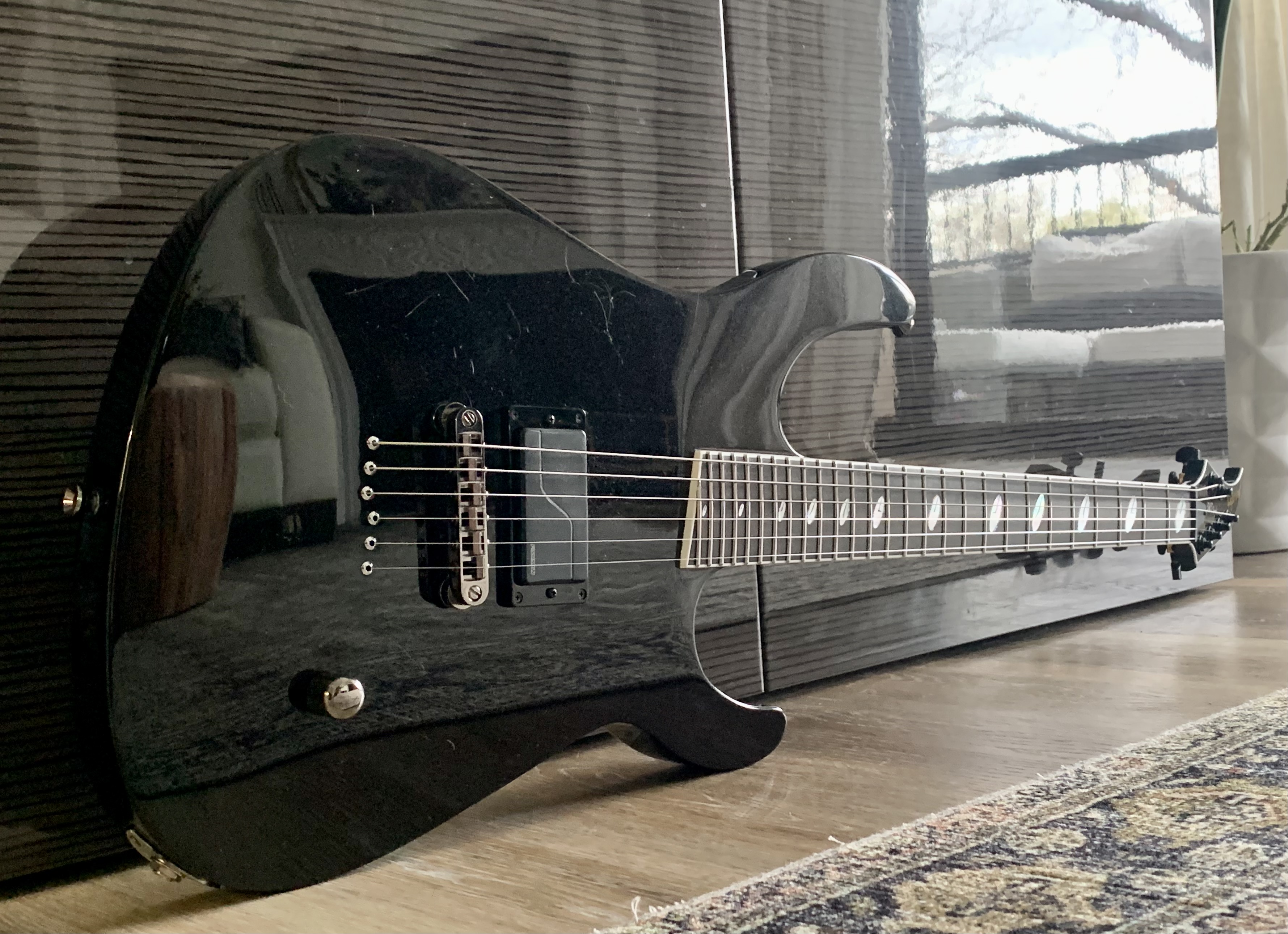 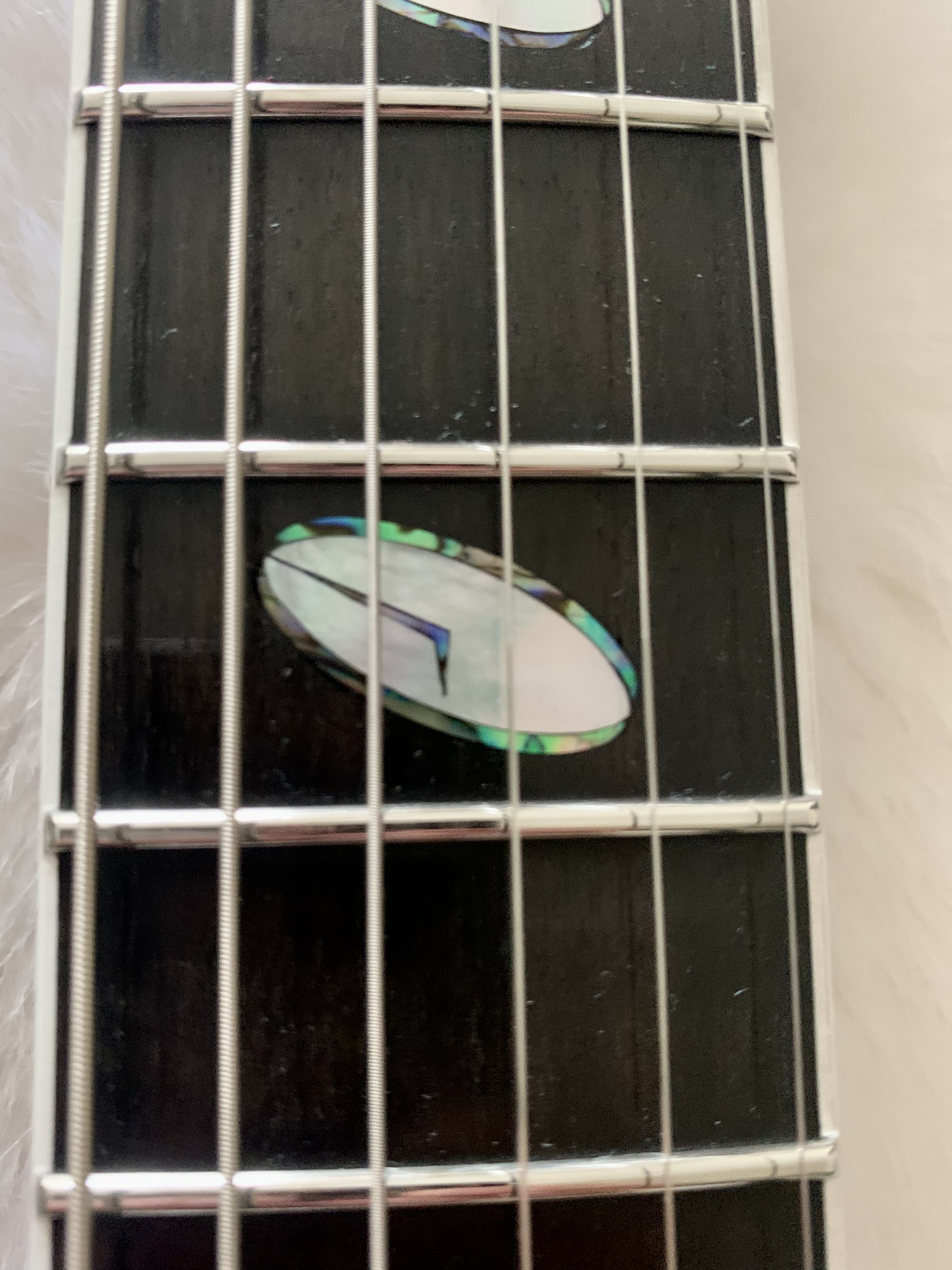 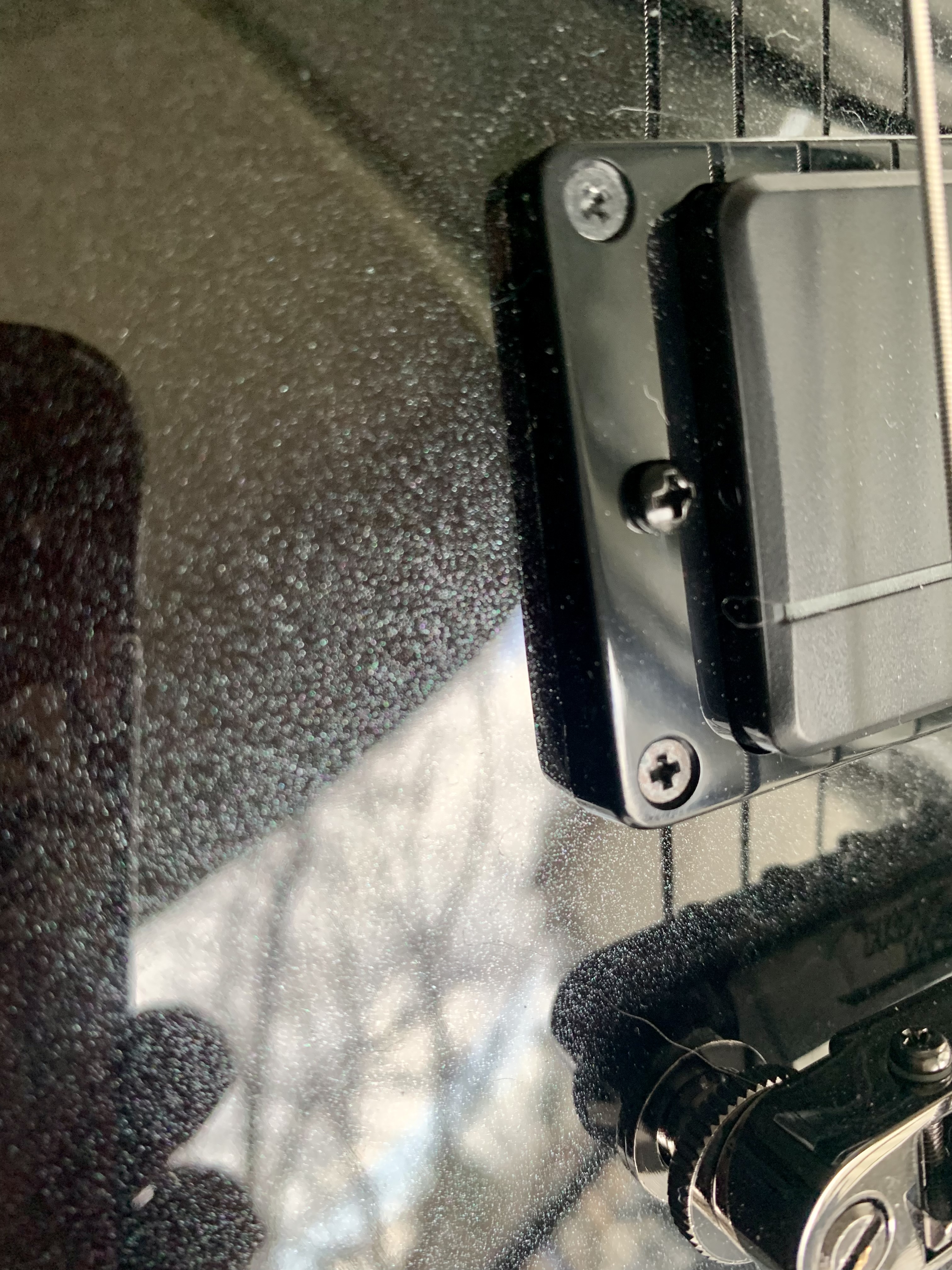 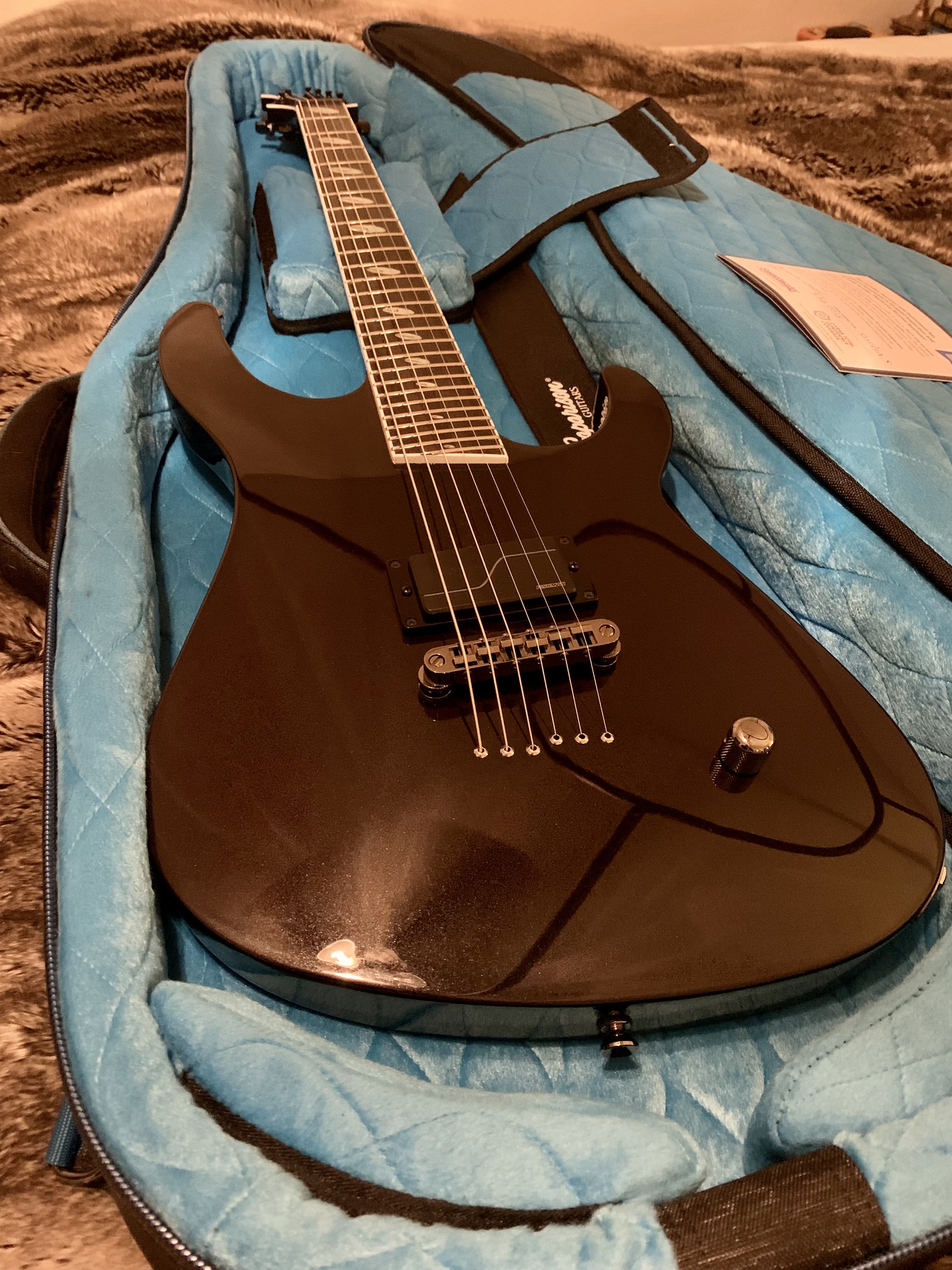 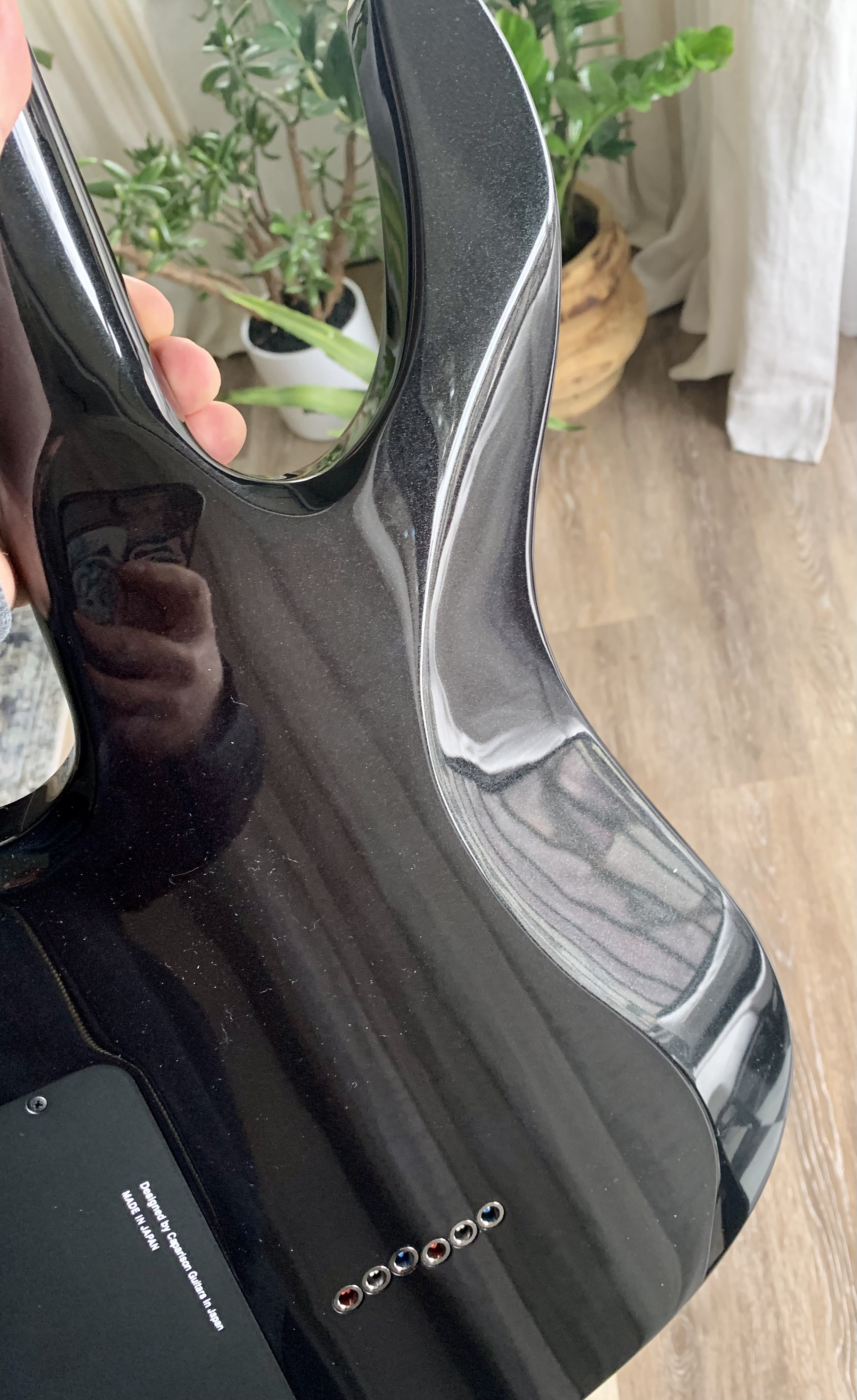 As you can see from the last couple photos, it’s not jet black, there’s a bunch of sparkle in it.

Playability is off the fuckin charts....this thing showed up in tune and I dig that.

Neck reminds me a lot of an ESP thin U, but with meatier shoulders...I opened everything up, chucked a drum track into Reaper, fired up the Herbert and just jammed...trying different pedals, different volume levels etc. I'd been messing around for a couple hours and realized there was zero adjustment period for the neck....just feels like an ESP neck but slightly bigger which is my main gripe about the thin U...needs bigger shoulders.

There are two voicings for this pickup, the Modern KSE thing and the Classic voicing...Modern is sick for just fast paced groove metal, the Classic works a lot better for the doomy shit I've been doing since my accident last year.

Far as the build itself.....for a 7 lb guitar, this thing feels really solid...just tightly packed and dense, the pot is perfectly aligned and turns smoothly, Hipshot tuners are some of my favorites and I have them on one of my other guitars, Gotoh bridge is solid as fuck. Fretwork is IMMACULATE...there's not ONE that's off...and the small SS frets are something I really dig. I have jumbos on all my guitars except the Telemaster, and I've really enjoyed playing that guitar with a lighter touch the last few weeks, so this wasn't an adjustment period for me either.

I WILL say that as of yet the KSE Fishman isn't my favorite...I've been off the Fishmans for about a year now, ever since I got the Viper with the 81/60 in it...but a buddy posted a thread a couple weeks back about making what you have work for you instead of buying new shit all the time.

I took his advice and EQ'd everything for the BKP Piledrivers in my Telemaster and now I really dig them, so I'll take some time on this one and see if I can get it to my liking. Can always replace, and a black chrome 81 would look sick in this guitar lol

For some people, the fact that a guitar this expensive comes with a gig bag instead of a case would piss them off, but the fact that I have zero room either here or in the truck for more gigantic guitar cases was a selling point for me...and the Reunion Blues bag this thing comes with is next level gig bag shit...I think they're around $250 as a single purchase, and the fact that it's THAT padded and stacked with pockets means I can just chuck this thing into the truck and not worry about it.

Anyway...that's my big purchase for the year. Like said above, this thing has been haunting me since it came out back in 2017, I'm glad I was able to snag one and I'm glad it lived up to my expectations. This is by far my most expensive guitar and justifying this buy to myself, I promised I'd send it back to SW if even one thing stood out as not to my liking, but it's staying.

I'll take it out on the road with me next week and give it some time with the Orange/Mesa cab and see what that's like too.

I have some really decent guitars here, and that's what I'm comparing this thing to....my main 4 are the Telemaster, an Ibby RGA121, a 2011 ESP Viper, and my custom LP.

They all have something I really dig.....TM has the EVH neck with the smaller frets, my LP has SS frets, the Ibby RGAs are just super solid guitars and my Viper has been my main jam since the day I got it...light, super fast easy to play neck etc....but this thing is some next level shit and I could see it ending up my #1 really quickly.

I could see if you were an ESP guy agreeing that this is similar but not worth the $. You could get a Horizon or an M-1 even and be in the same ballpark. At these prices and at this level it's aesthetics and personal choice, really. I wanted THIS guitar, and even if the M-1 is super close for specs, if I've learned anything as a certified gear whore in the last 20 years, it's buy the thing you really want even if it's more expensive because it's going to save you money in the long run.

If this guitar haunts you in the way it did me, just grab one. It's worth it.

Nobody loves this huh? Ok

12 paragraphs of a review cause I thought somebody here might wanna know. Lesson learned.

12 paragraphs of a review cause I thought somebody here might wanna know. Lesson learned.
Click to expand...

I “liked” it back when you originally posted it. Lol

killer guitar. Would love to check one out but my first experience with a caparison was a letdown. That’s definitely a nicer model than what I had and it checks nearly very box for me in what I like in a guitar.

Color looks like black pearl to me. I had a black pearl Y2KV back in the day, stunning color.