The Great White Fire was exacerbated by the Clubs cheap Sound Foam..

It's come out the the Company hired by the CLub Owners to install Sound Deadening Foam skimped and used Packing Foam which helped the Club burn to the ground with a quickness..
100 people died.. Damn. 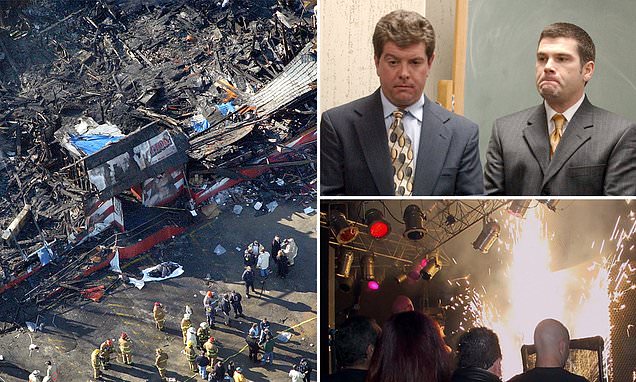 That would be some scary shit to go down
J

i remember watching that on cnn or something the night it happend. i was up late, posting on message boards probably, and the news broke it. That video footage still freaks me out. The filmer caught the start of the accident, and he/she made it out alive, but 100 or so didn't. Crazy, and sad as fuck. I still can't believe Jack Russel, or any of the surviving members had a career, even on a small level, after that. i figured they'd all just fade away into obscurity, but now there are 2 Great Whites out there!

Yeah but using live Pyrotechnics with no precautions w/a 10 to 12 ft ceiling was asking for it and negligent.

I remember that well. It lead the news every day and night for over a week. The band and club blaming each other and the fault seemed to shift from one side to the other. No matter how you look at it these were just music lovers going out to see live music and died because of someone else's carelessness. It's a shame.
K

It was not actually Great White.
It was Jack Russell's band.
I saw them in Seattle and talked guitars and amps with Tye Longley.
He was the guitar player that died in the fire.
He was using Bad Cat amps.
I believe he went back in to try to save people and died.
The whole thing was a tragedy!
R.I.P.
All that perished

Some of the video I remember seeing at the time was very disturbing. People piled up trying to get out of 1 exit that was obviously obstructed. Not the way I want to leave this world, for sure.

That footage was sad but so helpful for the investigation. Was so sad that those people fell at the exit. They couldn't pull them out because everyone was stacked and the weight was too much.

Why would they wait 20 years to report this though? I still feel it negligent on their part to allow that with how low the ceiling was but they definitely have a point if cheap materials were used and the fire spread quicker. Nothing bring those 100 people back though.. horrible images of how packed it was and how people died.
V

That video is a constant training tool in the fire service to this day, especially for new engineers( the guys who drive and pump water), and the reality of a non hydranted area and doing the best you can with tank water only. Would’ve hated to be on that call, what an absolute shitshow.


I do believe this isn’t new information, or Atleast the way it’s been said here. After the fire, the families went after any and all companies they could to sue, and rightfully so. I forgot what brand the FOH was, I think JBL? anyways, they all found loopholes in the equipment used in just about every piece of gear or equipment in that place, including yes the foam in the speakers in the FOH. That’s what happens when something like this goes down, as I’m sure that’s not surprising: they cast the net wide on anything and everything, and not surprisingly, everyone paid out basically immediately, because they knew they were fucked. Even if the FOH speakers for instance didn’t really effect the spread of the fire ( news flash, they didn’t, nothing would’ve changed had that foam been different), they still would be liable in some way shape or form because that foam in and of itself, is not the best for the job, and can transfer heat. And that’s how any lawyer would spin it, just the way it is.