this is probably a dumb question...but are Caparison guitars worth the price tag?

I have never seen one in person. I love the specs, and looks of most caparisons, but they're super expensive. Are they really worth the money? or are they just expensive because they don't have U.S. distribution or something? sort of like how mesas are super expensive in Europe? For what they cost, i expect FLAWLESSNESS, and an insturment that will last a life time. Are these some god level guitars, or are they just expensive?

I'm thinking about pulling the trigger on this: https://reverb.com/item/54285056-caparison-dellinger-ii-fx-am-dark-green-matt

please...someone else buy it, so i can stop being tempted to just swipe this on my cc. ...and having to justify it to the wife.
yes i am that guy now.

I've never owned one but I will say if you love it, it is worth the price that's all that matters to me!
C

I don't know if it's the same with Caparisons but when I play a high end guitar they just feel solid. Suhr, mayones, aviator, etc all had that same feeling. Then my indo guitars feel like toys afterwards. Specs can be misleading that's why you need to lay hands on them

I’ll preface my post with the fact that I like Caparison guitars. The MSRP on them is very high for what you get in my opinion ($3100 new for that guitar is a joke) and people lately have been pricing them very high used. That finish for the fx-am’s doesn’t look all that good in person and I wasn’t all that impressed with the overall sound of the guitar+pickups for the one that I had (which arrived damaged - headstock tip was chipped off due to a poor packing job - so I ended up returning). Necks and fretwork are really nice though - the neck on the Dellingers are also not super thin shredder necks as a fair warning, has ESP M-II vibes.

Sucks because you used to be able to get a good condition Dellinger II for $1100-1300. If you’re going to drop $2k I personally would go for something else.

Different strokes for different folks, but for me, I love them. I’ve owned many. I completely fell in love with the Horus models. 24.75” scale length and offset superstrat body design.

stratjacket said:
Different strokes for different folks, but for me, I love them. I’ve owned many. I completely fell in love with the Horus models. 24.75” scale length and offset superstrat body design.

Interesting, I will have to look at these. I've been drawn to PRS Custom 24's for the 25" scale length so if these are similar then that is good to know. Thanks!

They are well built and feel solid. They are great guitars. Whether or not they are worth the price tag is up to you.

Got a Horus in here on a trade. Solid guitar. Nice neck. Weird bridge pickup. In a good way. It’s got a growl like tone. It’s non active. Just cool tone.
One of my favorite bands Evergrey used to use them exclusively.
Plays great. Feels good. Sounds excellent.

I was an ESP guy for a long time, owned my fair share and still own two.

I bought a Caparison a couple months ago after low key eyeing it for about 4 years.

It had the specs I wanted, the look I wanted and I bought it brand new so I could return it if there was even one thing I didn’t like.

Took it to a buddy’s house that I jam with; he’s a hardcore ESP guy and really doesn’t like anything else. He also said it was the best guitar he’d ever played.

For me, it’s the only guitar I’ve ever tried where not a single thing gets in my way. I can play anything I want to on this guitar and do it with ease. It’s sort of weird, actually. Got another friend that bought one recently; we compared notes and both of us felt like the necks were designed for us specifically lol

Really well built, feels solid as fuck even though it’s only about 7 lbs give or take.

At this price level, you’re talking about personal preference. I’d highly recommend you try one if you can, you might be amazed.

As far as the Dellingers go, there are other guitar companies that make those specs, 24 frets, Hipshot bridges etc….for me the TAT Special and the Horus are where it’s at. 27 frets is pretty cool even on a 25.5” scale but at 24.75” you can rip like lightning. 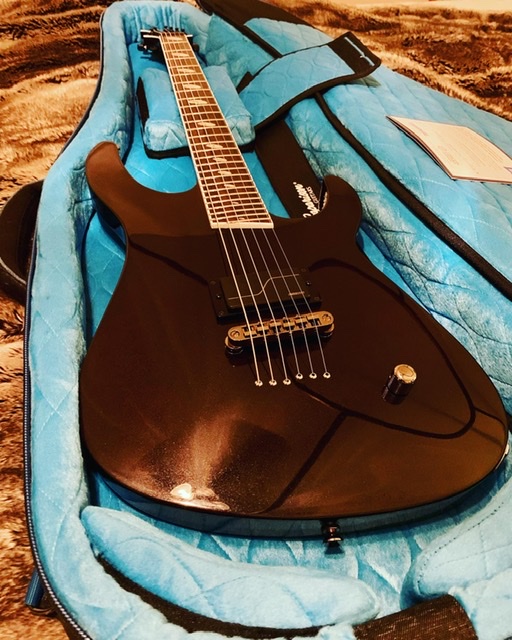 any tuning issues w/o a straight string pull? or is it just slight enough not to matter? thanks

If there is one universal thing I've learned about guitars is that no guitar is the same even though they look identical. It could be the set-up, neck contour, frets, string gauge used, wood variations, etc.

Put that guitar in your hands and then you'll know, only then. Guitars that others have cherished have made my mind spin when I actually tried them. I have yet to play a Gibson Explorer that didn't feel cheep. I have a similar shaped guitar, a Jackson RR that plays like a dream. The import version of the RR is like an Explorer.
W

Had a TAT a while back - to me, it felt like it was right between an 80's Jackson and 80's ESP in the feel of the neck, and the quality of the build.
Great guitar but I ended up selling it

I’d recommend keeping an eye on Reverb. I looked for a couple months, but eventually a good deal came along. I snapped up a Horus FXAM in charcoal matte finish for $1,600. It was basically brand new, just a little hand rub in the matte finish. If you want to try, that’sa good route to go because you can flip it without losing money.

While they’re all good and in the eye of the beholder, I’d get one of the newer models no more than about 5 years old. They made a slight change in the body model and the older ones are not as offset body style as the newer ones. Unless you like more of the straight up super Strat type bodies.

What mean by offset body, quality is still there, just a different look and feel for me that I really like:
2015

stratjacket said:
I’d recommend keeping an eye on Reverb. I looked for a couple months, but eventually a good deal came along. I snapped up a Horus FXAM in charcoal matte finish for $1,600. It was basically brand new, just a little hand rub in the matte finish. If you want to try, that’sa good route to go because you can flip it without losing money.
Click to expand...

Another spot to keep an eye on is sweetwater’s alternate eBay account Jeffsmusicgear (the one they use for returns they can’t sell on their site). Any wear is meticulously photographed and you can usually score a mostly mint condition guitar with a small mark for below half the new price because they list everything so low.

Also, if you see one listed by a bunch of those Japanese re-sellers check the USA site for the big name Japanese shops (Ishibashi, Planet Guitar, etc) to see if the price is lower or they have a sale going. Two caparison so have I picked up that way and they were considerably less than they were listed for on eBay - no tax and no fees. You’ll pay a little more for shipping but many reverb sellers are already charging $125-$200 now to cover shipping costs. To top it off the Yen right now is at a 24 year low compared to the dollar so your $ goes a little bit further.

Gitfiddler said:
any tuning issues w/o a straight string pull? or is it just slight enough not to matter? thanks
Click to expand...

Not enough to matter. I tune up before every practice or recording session and it’s usually not more than ten cents either way.

I think it’s more me moving it in the gig bag than anything; there have been a few times that I recorded/practiced and been more careful, pulled it out the next day and it was dead on.

Wayniac3 said:
Had a TAT a while back - to me, it felt like it was right between an 80's Jackson and 80's ESP in the feel of the neck, and the quality of the build.
Great guitar but I ended up selling it
Click to expand...

This. I always really liked the Jackson Stars, and that’s exactly what these feel like to me, just better equipped and more care taken in the builds.

I think yes they're worth it. I have only owned one and it was the 7 string AXFM.

It had this ungodly chime like no guitar I have ever heard before and yes the quality was Flawless.

I prefer a slimmer compound radius neck such as the KM-mkiii artist and while the Caparison neck was much chunkier it was so comfortable, easy to play and became one of my favorite guitars I have played.

I have not played too many high end guitars. But I felt it was worth the $2,200 I payed used.

If I drop that kind of cash again on a guitar it will either be another Capa or Mayones.

Indeed, a profound question this is. If one mans trash is another’s mans treasure, does perhaps that make a caparison one mans trash? Or, is it your treasure? And can you even began to put a price on such deep thoughts that lead to even deeper thoughts and heavier questions?

A large amount of thinking, this requires. Or are you thinking too much? A price, can it be put on your playing?

Myself I once asked, if I enjoy playing, and much fun I have, is this not what I pursue? So you must ask yourself one profound question? If a caparison, fun and satisfaction it brings, is this not priceless?