What is the best Les Paul you have ever played?

I had an 81 Standard I got from a friend in the late 90s. It was heavier than you could believe, but sounded and played magnificently.

It was a sunburst with some filled holes where I presume someone put a bigsby on it.

I played some Les Pauls over the years that are considered to be from the best years but that 81 hung with the very best.

So for me, an 81 standard. It sounded exactly like what you think of when you imagine glorious Les Paul tone. Man, I wish I didn’t part with that one.


What about you guys?

I played one a while back that was re-fretted with jumbo stainless steel frets that was crazy badass.

I have a replica Brent Gutierrez built that plays and sounds fantastic. It was a pet project of his that he sold me later down the line.

So far my 2019 59. I reached out to a dealer asking about 2 of 3 Murphys he ha,d interested in buying one. Murphys are 7k+. He told me to forget about them because he had a 59 he just got in that he said was the absolute best he has had through his shop. I figured if he is talking me away from a Murphy it was worth checking out. He was not lying. It is the best LP I have played. I have never tried any of the vintage ones but I can imagine this one has that vibe. I have tried and owned quite a few.
T

In college, one of my classmates had his dad's early- or mid-70s Les Paul Deluxe. Clear/natural finish, sandwich body, mini humbuckers. Acoustically it projected like no other electric I'd ever played. Sounded amazing through an amp as well.
B

Not sure if this counts, but without question the 1957 Les Paul Jr I have (with a ‘50’s p90 retrofitted in the neck) is the best sounding electric guitar I’ve tried period and I’ve played my share of ‘50’s LP’s (all of which were great and some in a similar league) including an actual ‘59. The 2nd best has probably been my friends ‘56 LP that was re-finished to a sunburst and retrofitted with PAF’s. It sent a real ‘59 he had packing. Another great one is my ‘69 Black Beauty Custom or this all maple ‘54 LP Jr I tried once (most old JR’s tend to be killer and underrated). Most of the late ‘60’s LP Custom’s sounded dead to me, but my ‘69 is one of the few guitars I’ve had that’s heavy, yet still has a resonance, tonal complexity and sweetness to its tone that I’ve only heard in lighter weight guitars while still also having some of that density/solidity to the tone found in heavier guitars, but it really admittedly isn’t as dense or punchy sounding as it should be given it weight, but man does the tone have sweetness to it

I’ve tried some really great re-issue LP custom shops (like R9, 8, 7, etc) that were cherry picked from literally over 70 guitars from guys I know, but as good as they were absolutely none of to me them had the tonal magic of the older ones I’ve played and at best sounded cute in comparison. With those older ones the notes connect in this very humane/organic way that I just haven’t found matched the same way and the warmth is just not there in the later ones. Those guys disagreed and felt they were as good as any ‘50’s one, but I just didn’t hear the tone being on the same level. To me the best sounding non-vintage LP type guitars I’ve tried so far are probably the McInturffs. I still actually play my McInturff Glory most often of all the guitars I have/had. With its Tone Specific Bloombuckers it sounds pretty close to my friend’s ‘56 LP (with PAF’s retrofitted) when AB’ed, but not gonna pretend like it really sounds the same, but depends on how discerning one is I guess. FWIW, my opinions on guitars are always all based just on quality of tone, not aesthetics, playability, etc. Really great sounding guitars are a rare find. The other qualities not nearly as much. Many modern day boutique makers can make a guitar that plays and looks great, but few that I’ve tried really have amazing tone imo, sadly because most just don’t seem to care enough about that (on a musical instrument not prioritizing tone!), but I digress
Last edited: Sep 12, 2021
G

The Murphy I played was not worth the 7k.

Best one I’ve played so far is a 30th anniversary Les Paul custom I played at a guitar show many years ago. It was priced at 10k and worth every penny of it. It was a bit gaudy but the nicest one that’s ever crossed my hands.

I've played a bunch, but my '77 Les Paul custom that got stolen out of our tour van was probably the best. That guitar seemed to play itself; and had the buckle rash and scars to prove it. I eventually tracked it down 15 years later, but the owner wouldn't let me buy it back. I'm pretty sure he had bought it unknowingly, but was still a dick about it. If you ever read this, guy from Moses Lake, I still want to buy my old guitar back.

As an honorable mention, the limited edition late 00s silverburst standard @itsgoodnow sold me is the best modern Les Paul I've ever played. Somehow it plays better than the couple of r9s I've played.
I

DanTravis62 said:
I've played a bunch, but my '77 Les Paul custom that got stolen out of our tour van was probably the best. That guitar seemed to play itself; and had the buckle rash and scars to prove it. I eventually tracked it down 15 years later, but the owner wouldn't let me buy it back. I'm pretty sure he had bought it unknowingly, but was still a dick about it. If you ever read this, guy from Moses Lake, I still want to buy my old guitar back.

As an honorable mention, the limited edition late 00s silverburst standard @itsgoodnow sold me is the best modern Les Paul I've ever played. Somehow it plays better than the couple of r9s I've played.
Click to expand...

Glad you’re still loving it. That guitar outlasted about a dozen Les Pauls I owned at the same time. And I shot each of the ones I owned out against other ones when I bought them. That’s a fantastic one.

itsgoodnow said:
Glad you’re still loving it. That guitar outlasted about a dozen Les Pauls I owned at the same time. And I shot each of the ones I owned out against other ones when I bought them. That’s a fantastic one.
Click to expand...

Doesn't surprise me at all, it really is the best modern Les Paul I've played. The fretwork especially, is really amazing. It's incredibly easy to play stuff on the dusty end of the neck, which is a sticking point for me on most Gibsons.

Adding to it, every single other humbucker equipped guitar I own, I've replaced the stock pickups with Jim Wagner godwoods or icebuckers.

This is the ONLY modern Les Paul I've ever played where the stock pickups are just so *right* with the guitar, I would never mess with it.
T

I have played and had/have a ton of Les Pauls and the best one is my Zakk Wylde's Les Paul with Richlite fingerboard.
P

Mid 70s Deluxe “clownburst“ that was a factory second, but just had “it” all, played like butter, sounded fantastic and had lots of mojo. A true relic before there was such a thing.

1981...yes, I can vouch for there being something special about the 81's! This one is from January of 81 and was my #1 for about 25 years. I still have it but its in semi-retirement in favor of prettier/flamey Custom Shop les Paul's that honestly don't sound or play any better than this Clownburst Standard! 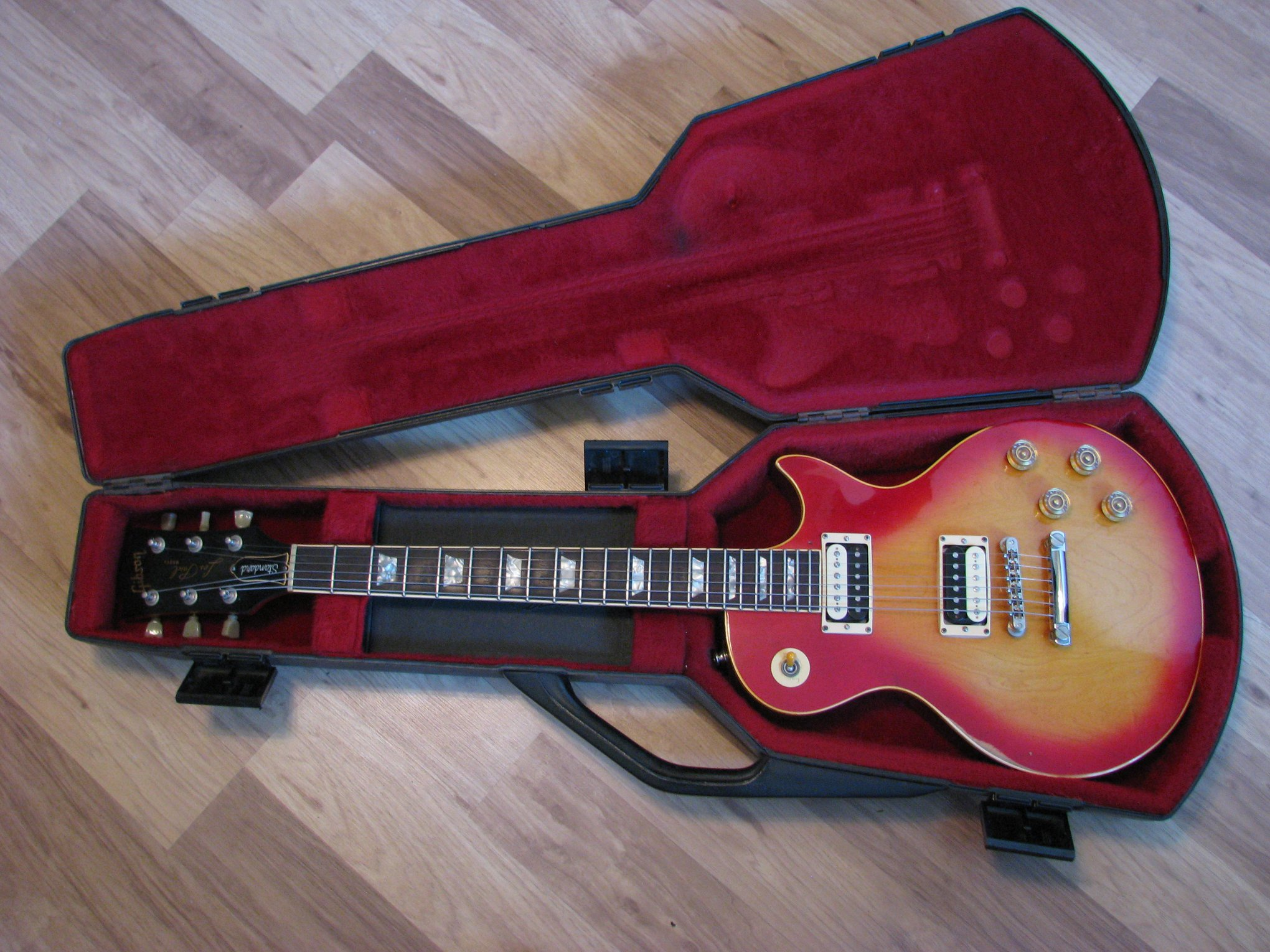 I have been playing many many years and I have unfortunately never played a Les Paul that did anything for me. It would be cool to come across one some day that I fell in love with.

My friends original 1957 Goldtop with hot PAF’s that were around 9.5k. The guitar had tone.
B

psychodave said:
My friends original 1957 Goldtop with hot PAF’s that were around 9.5k. The guitar had tone.
Click to expand...

My same friend that has that great ‘56 LP with PAF’s also has a PAF that’s ~10.5K that he says is a monster. The ones in the ‘56 are in the high 7 range if I remember correctly. Strangely the ~10.5k one came stock in the neck position of a vintage Gibson hollowbody. A real fluke. He said it sounded horrible (a muddy, boomy mess) in there, but put in the bridge position in any solid body and it sounds murderous. He’s gonna let me borrow it once he finds where it is

This bad boy. 59 replica with PAFs: 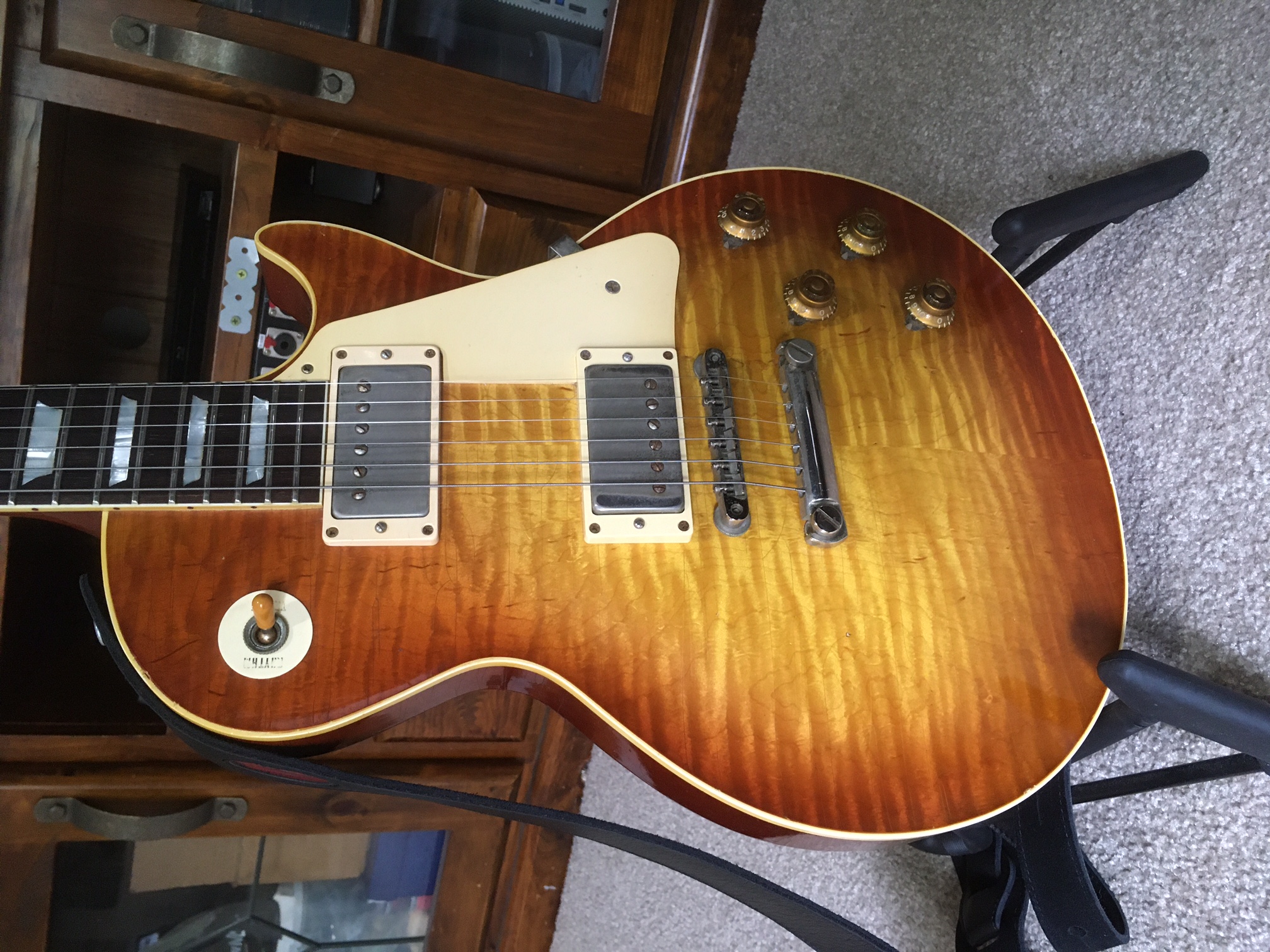 I had a 2012 Les Paul Classic Custom, cream with. The baked maple neck. Sounded amazing, I put an SH-6 in the bridge and a dimarzio Evo in the neck. That thing could sing when it came to lead guitar. I have a 79 Custom now it plays nice to but that classic custom was something

I have an ‘82 standard. Still has the Tim Shaws in it. Plays, sounds, and feels absolutely amazing. I had Greg Platzer do a refret on it when I got it because it needed it badly.

Zachalou said:
Only les Paul I’ve played and enjoyed was one of the studio lites
Click to expand...

The studio lites from the early/mid 90’s are awesome.
had a few of those and they all sounded good.
I had a black Studio standard from 92 I think, that was one of my favorites. Should have kept that one.
I admit I’ve never owned an older LP tho, so I’m sure there is another level that I haven’t experienced? I’ve always been a stray/superstrat guy.
You must log in or register to reply here.
Share:
Facebook Twitter Reddit Pinterest Tumblr WhatsApp Email Share Link
Top