You're dialing in your amps WRONG!

Something came to mind regarding how people dial in their amps.

A lot of times I see people complaining online about their amps "sounding bad" while they're afraid to stray to far from the noon/middle positions. Of course not ALL of the time, but I do see it quite often. At least, people are often subconciously afraid to stray too far from the middle. I've also fallen victim of this sort of habit in the past. In one case I just got a new amp, my ENGL Fireball 100, which is one of my favorite amps, and I wasn't completely satisfied with the tone until a friend suggested that I pushed the mids and treble to more extremes and tone down the presence. Pretty far from the noon positions but I tried it and it sounded SOOOOO much better! For some reason in my mind I thought that the amp "sounded how it supposed to sound with all the controls at noon". However, some amps really come to life when you try some more extreme settings.

The ENGL fireball is a great example because some people online like to claim that "ENGLs get lost in the mix". But I believe that it's likely due to the fact that people aren't dialing them in to reach their full sonic potential. Another great example is the Boogie Mark series amps. For chunky modern high-gain rock/metal tones these amps need some pretty extreme settings to sound great. My Mark V35 really has that going on. Turning the treble to 10 and mids + bass to 0 really makes it sound much tighter (not even taking into account the graphic EQ).

I made a little video on this with some sound examples so you can hear and see what I'm talking about. Have you fallen into this trap? What amp comes to mind that needs more extreme settings for it to sound good? Discuss!

I made a thread on here some time back about how I run my Splawn with the Treble on '0'.

I asked if others do this with their amps and I got an overwhelming response. So yeah.

311splawndude said:
I made a thread on here some time back about how I run my Splawn with the Treble on '0'.

I asked if others do this with their amps and I got an overwhelming response. So yeah.
Click to expand...

Interestig! I've never tried a Splawn but I'd love to hear an example of that. Maybe they have a bright cap in there like a JCM 800? (I'm not an expert on components at all fwiw

Dial in with ears, not eyes. That's the mistake so many people make (including me) dialing Mesa amps and end up getting rid of them because they can't get the sound they want.
N

It really comes down to understanding the circuit design.

I never fully grasped my Zinky Mofo until I found out it was a Fender Bassman TMB circuit.

This, with the Tone Stack Calculator, is how I began to understand the complexity of what appears to be a simple thing:

It is not simple.

What helps me to experiment is to take a picture of the starting point and then go wild in tweaking. Then you can always go back to your baseline.

Mesa mark IVA is a great example for me. Just a quick picture lets me experiment. And a general rule is not only to tweak the EQ as you turn up the amp, but also to lower the bass. I say this, cause I often forget.

Here you can plug in your values and see how it affects EQ: https://www.guitarscience.net/tsc/info.htm

I put everything at 11 or 2 o'clock. One or the other is close enough.

stephen sawall said:
I put everything at 11 or 2 o'clock. One or the other is close enough.
Click to expand...

Let me guess? Marshall or Orange? That definitely works for some amps, I agree!
N

Dimed with a 25K mid pot

It's a very dramatic difference, way more mids and flatter curve. Geeky as all get out, but you get out what you put in.

Here's a vid with Pete Thorn and Dave Friedman discussing the 25K to 50K mod:
Edit: I linked it with the timestamp so it gets right to business.

Guitarjon said:
Let me guess? Marshall or Orange? That definitely works for some amps, I agree!
Click to expand...

It's a quote from Mick Taylor from The Pedal Show.
The amp I use most these days has two knobs. Volume and Tone. 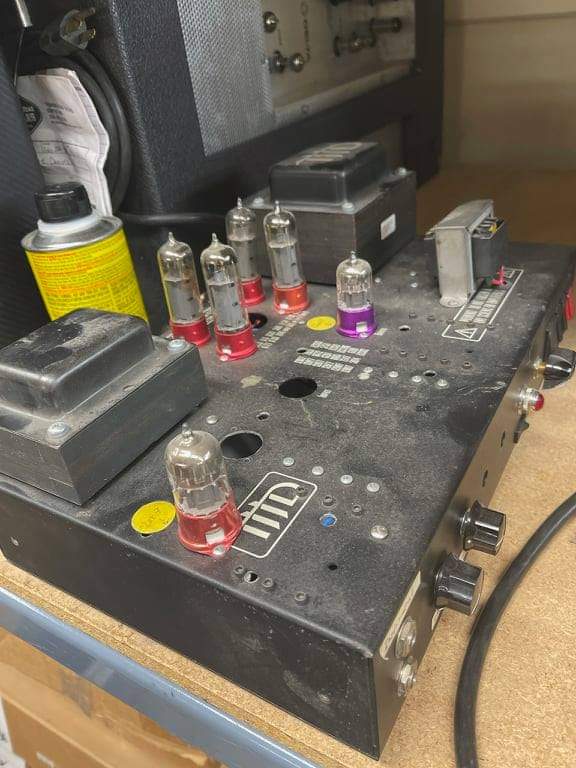 All it takes is dialing in with your ears. I ignore knob labeling for the most part and just spin them until my ears are happy. Most amps I've owned have required some pretty extreme/non-conventional settings to make me happy. An eq in the loop can be a great great tool too

Not sure how people can play in a band and hear themself with knobs at noon really. You HAVE to be extreme when the mix is crowded.

That’s why I have no faceplate or readable knobs on the 2203 I built. I run my bass way higher than I would have thought and gain lower.

stephen sawall said:
It's a quote from Mick Taylor from The Pedal Show.
The amp I use most these days has two knobs. Volume and Tone. View attachment 116134
Click to expand...

So you ended up with that prototype. I remember seeing it at Andy's shop years ago.

Findthetone1 said:
Dial in with ears, not eyes. That's the mistake so many people make (including me) dialing Mesa amps and end up getting rid of them because they can't get the sound they want.
Click to expand...

It’s true but also when you’re used to a “traditional” tonestack, amps like Marks and Rectos can throw you for a loop. It doesn’t follow that the treble pot on a Mark lead channel is also essentially a “saturation” pot unless you understand the at least roughly how the amp is designed.

In some ways Rectos are even weirder to dial in than the Marks because of the channel/mode behaviors and how they effect especially the treble and presence controls, and how the different tone controls interact with each other.

The worst to me are the Peavey Ultra series active EQs. They aren’t even interactive with each other but each control is cut/boost so at noon it’s essentially the same as turning a Marshall’s EQ all to 10. It’s not necessarily that complicated but something about it never sounds quite right.

But it’s hard to follow your ears when there’s a psychological thing that happens when you’re turning knobs expecting a certain kind of change and it doesn’t happen.

Nah man, YOU are dialing your amps in wrong.
We’re all fine with dialing in our amps.

Dino 939 said:
Nah man, YOU are dialing your amps in wrong.
We’re all fine with dialing in our amps.
Click to expand...

Ever heard of the term "tongue in cheek"?
T

The Recto trick to put the treble at 0 and dial in the high end with the middle and presence control changed my life (well, to an extent). It provides a nice alternate tone from some of the more common settings. Works well on my older 2 channel, and I wouldn’t never thought to try it on my own.

BackCrack said:
So you ended up with that prototype. I remember seeing it at Andy's shop years ago.
Click to expand...

There was two prototypes built about 15 years ago. This is a photo of one of them.
He built two more last year. One is mine and Andy has it right now. I'm having a tube tremolo added and a few other small things. So two more knobs. Speed and depth.