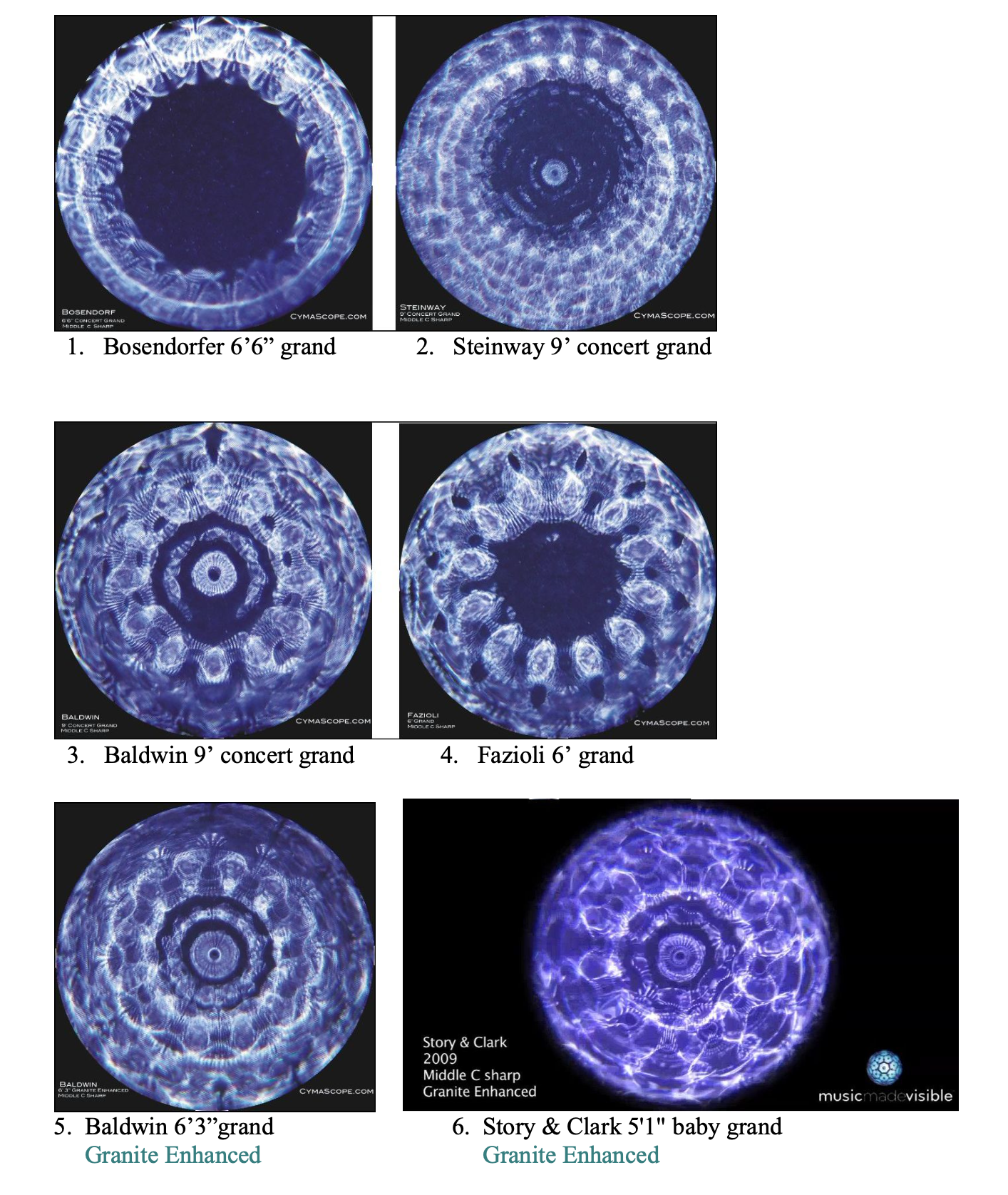 Ok everyone, this should give you some perspective in real time data showing the still shots of the best images taken from a high speed camera above a 18" diameter of water that shows what frequencies that are present from the video recordings John Stuart Reid took from each of these pianos I had pre-recorded and sent John to do this test. He played 1 note, the middle C Recorded by classical piano spokesperson for Stone Tone Dr. Richard Bosworth. John Stuart Reid and his CymaScope invention shows the Story & Clark piano with the granite bridge is analyzed in real time. At the bottom right corner picture shows my baby grand and to the left the Baldwin 6'3"Grand my 2nd prototype with its full harmonic filled in circle.
Having such high harmonics sustaining on a baby grand is quite remarkable in comparison to the others that are much bigger and better quality.

The way this CymaScope functions is very accurate because recording the surface tension of water shows what frequencies are present as the recorded audio of the Middle C note is struck until there's no more sound. The Camera and the speaker playing back the middle C is 24" above the 18" diameter bowl of water so when sound is played the surface tension of the water creates images depending of the frequencies present. The outer edge of the bowl of water is the lowest frequency and dead center is the highest. Looking @ my Story and Clark Baby Grand piano and the 6'3" Baldwin clearly shows at the very end of the note being play the circle is full showing in greater detailed image of the full audio spectrum sustains all together until theres no sound unlike the others which the FAZIOLI premium Italian made piano comes in second yet the images show square waves which are not a well defined as my 2 prototypes. Even though this is a piano test the granites performance is still relative to the sustain blocks no matter the application.

I never went crazy deep or any further than this in the science because after this test and several others no where near as complex as this was all that I needed to prove this concept a valid one back 2011 when I approached Yamaha beside witnessing the performance of the modified instruments I've done from inception.
Last edited: Nov 6, 2022 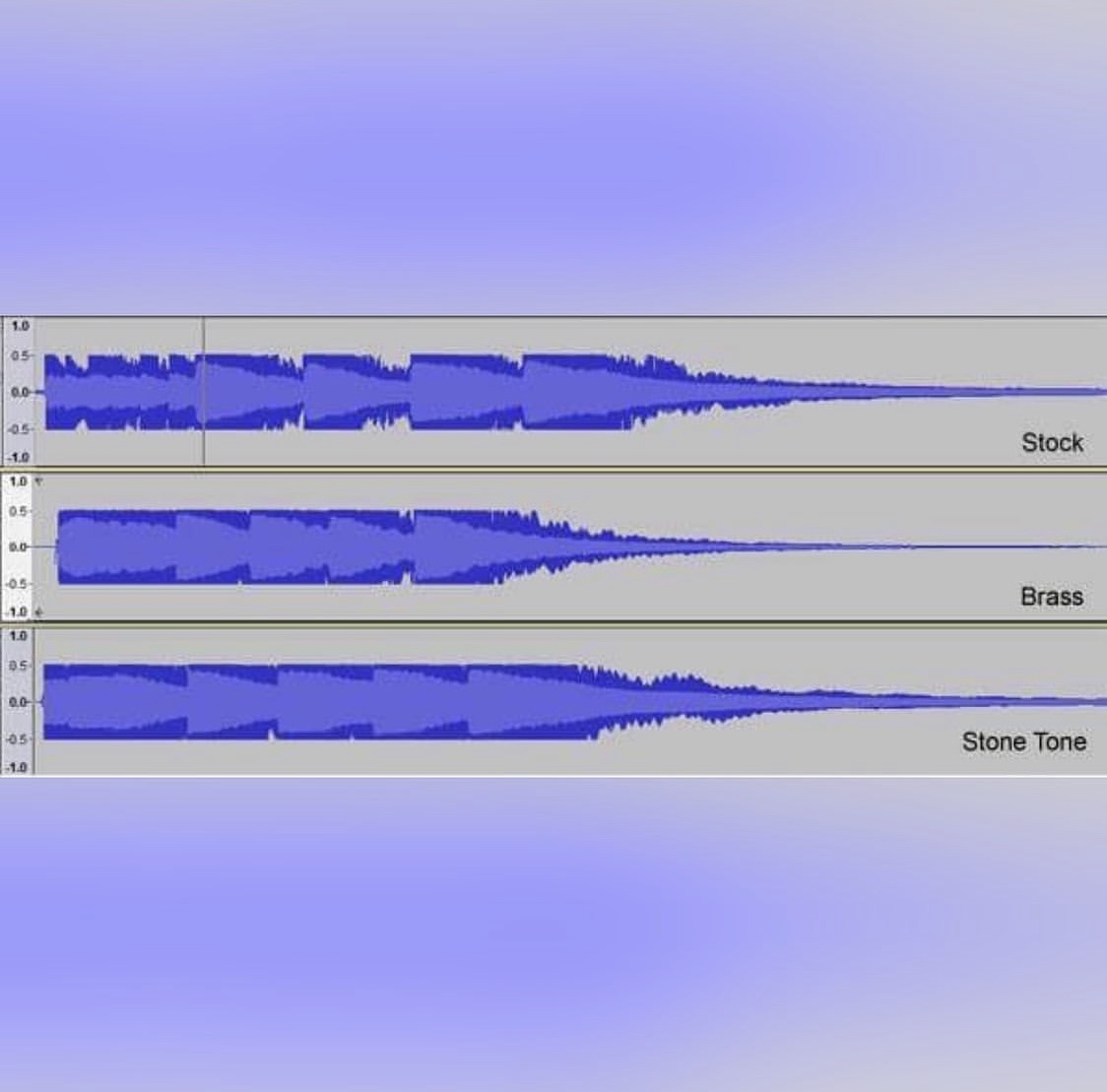 The strings were changed for each test by Bruce @ tmrzoo.com This test was played on a BC Rich worlock with a German FR original plugged straight into his DAW. The stock block is Nickel plated Brass which many mistaken for steel. Floyd Rose has never manufactured stock Steel blocks.

Dale said “I took measurements before and after replacing the brass block with the Stone Tone 32mm block. Using a simple E Major chord, strummed once, and EQ with post analyzer, I captured the following results at 2 seconds, 10 seconds, 20 seconds and 27 seconds. I performed the exercise twice with the brass block and twice with the Stone Tone and the results are quite clear. The Stone Tone provides measurable prolonged sustain vs brass blocks. It shows in the shape of the WAV file as well as the EQ post analyzer readings�where the brass block readings basically drop off over 500Hz after 20�seconds. I definitely dig Stone Tone and need to get a couple more for my 7 string guitars and the Floyd Rose Pro units... “ 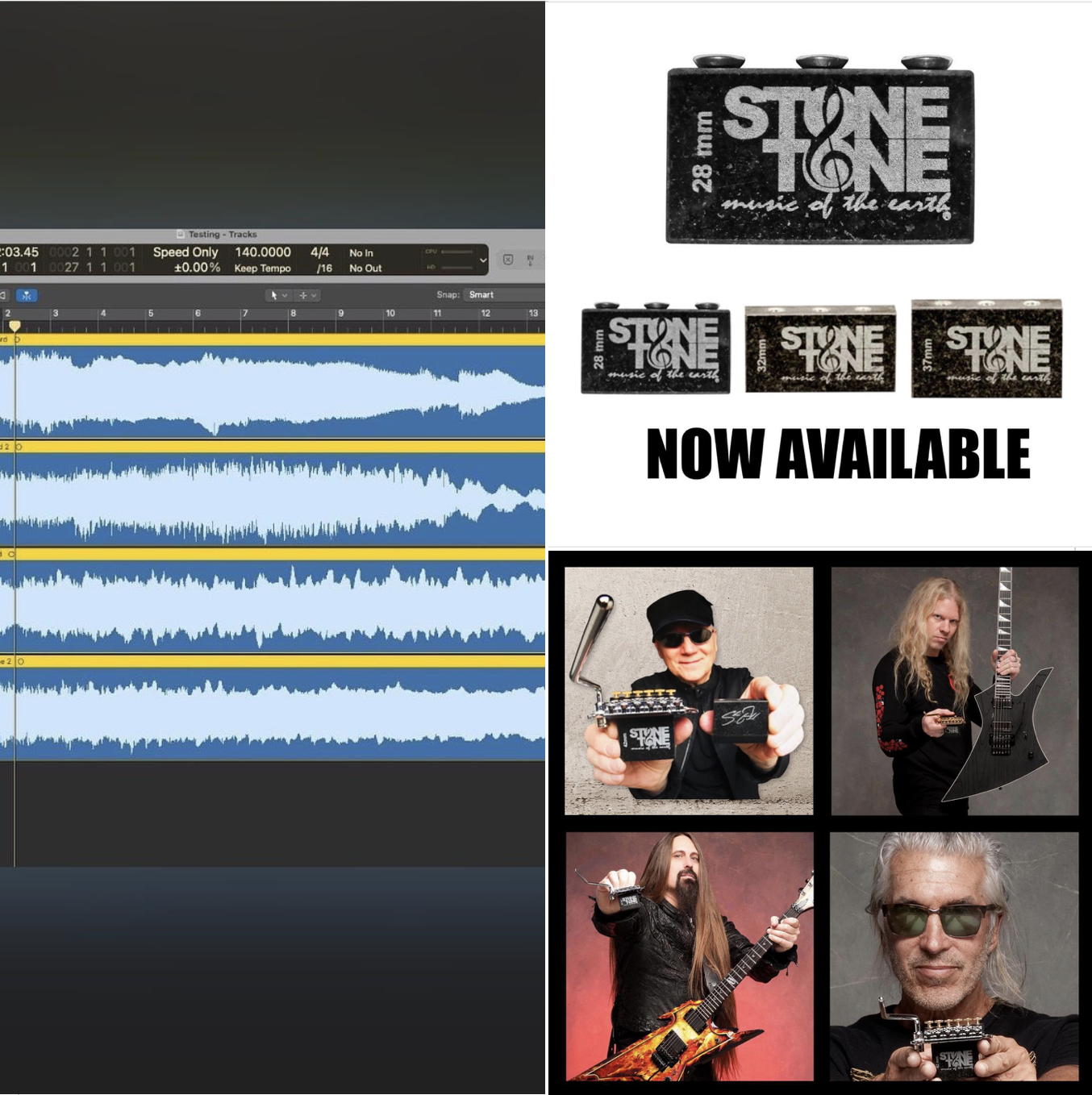 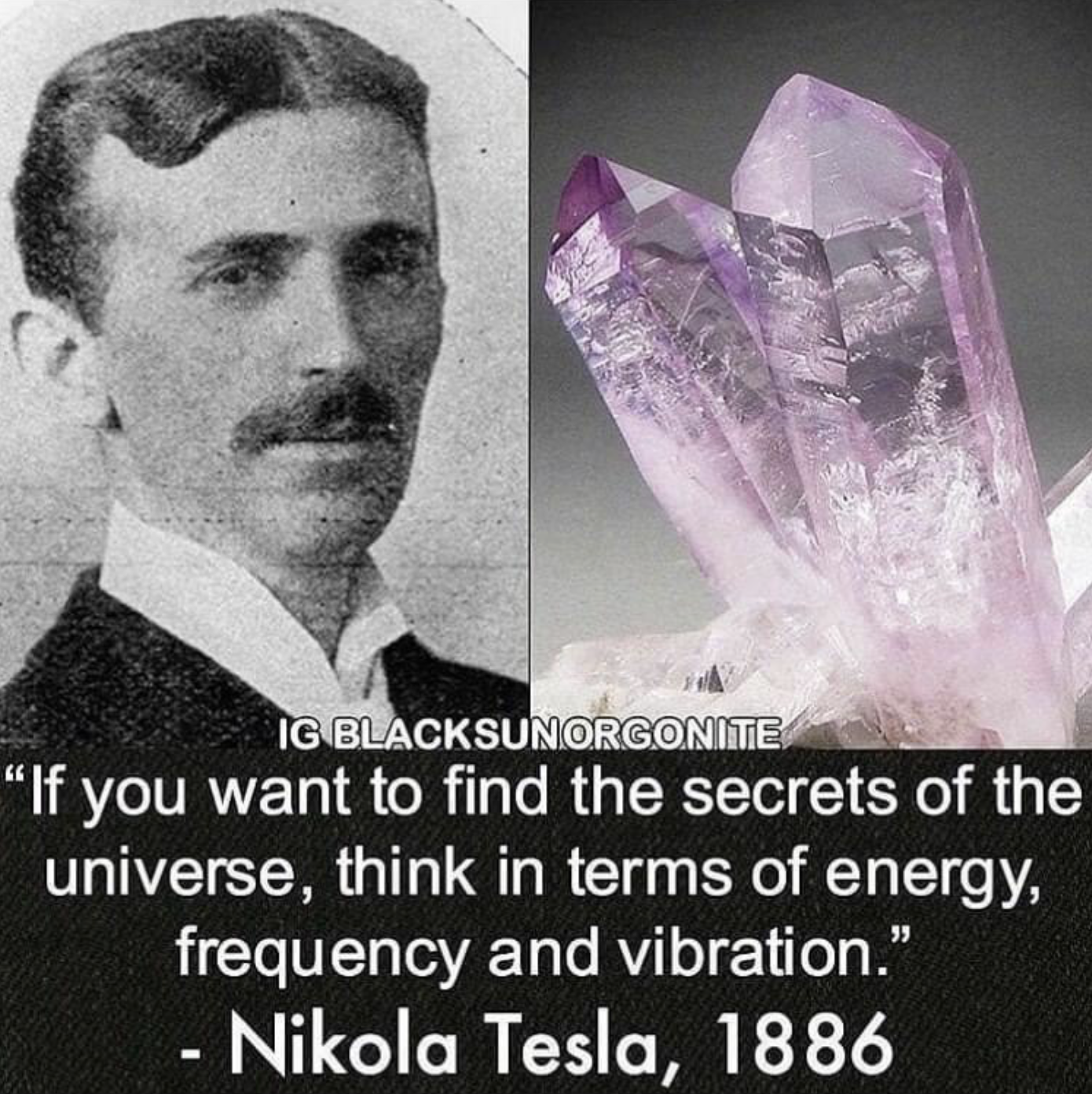 Big Thanks to Ofer Holan for doing this Podcast. 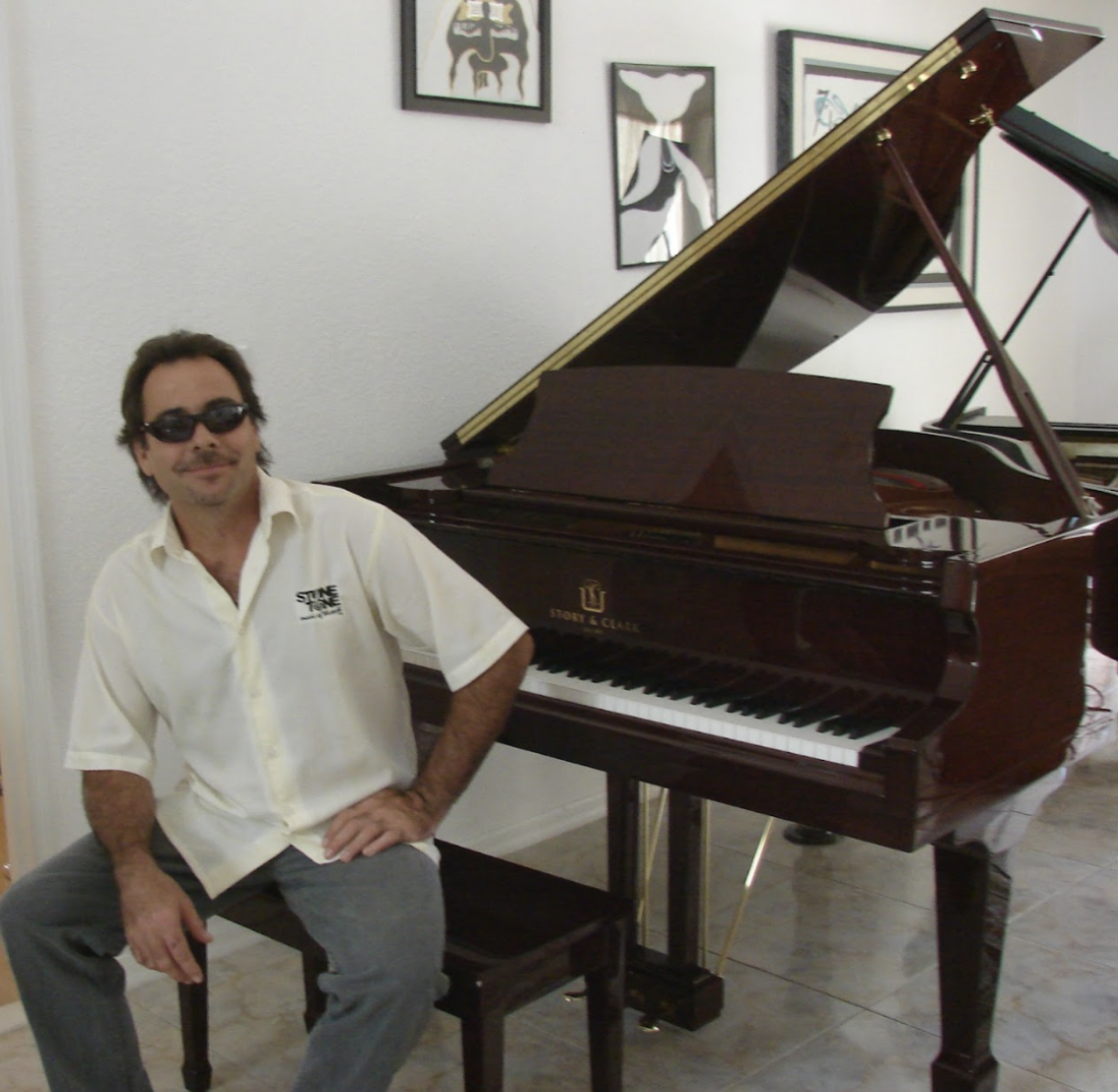 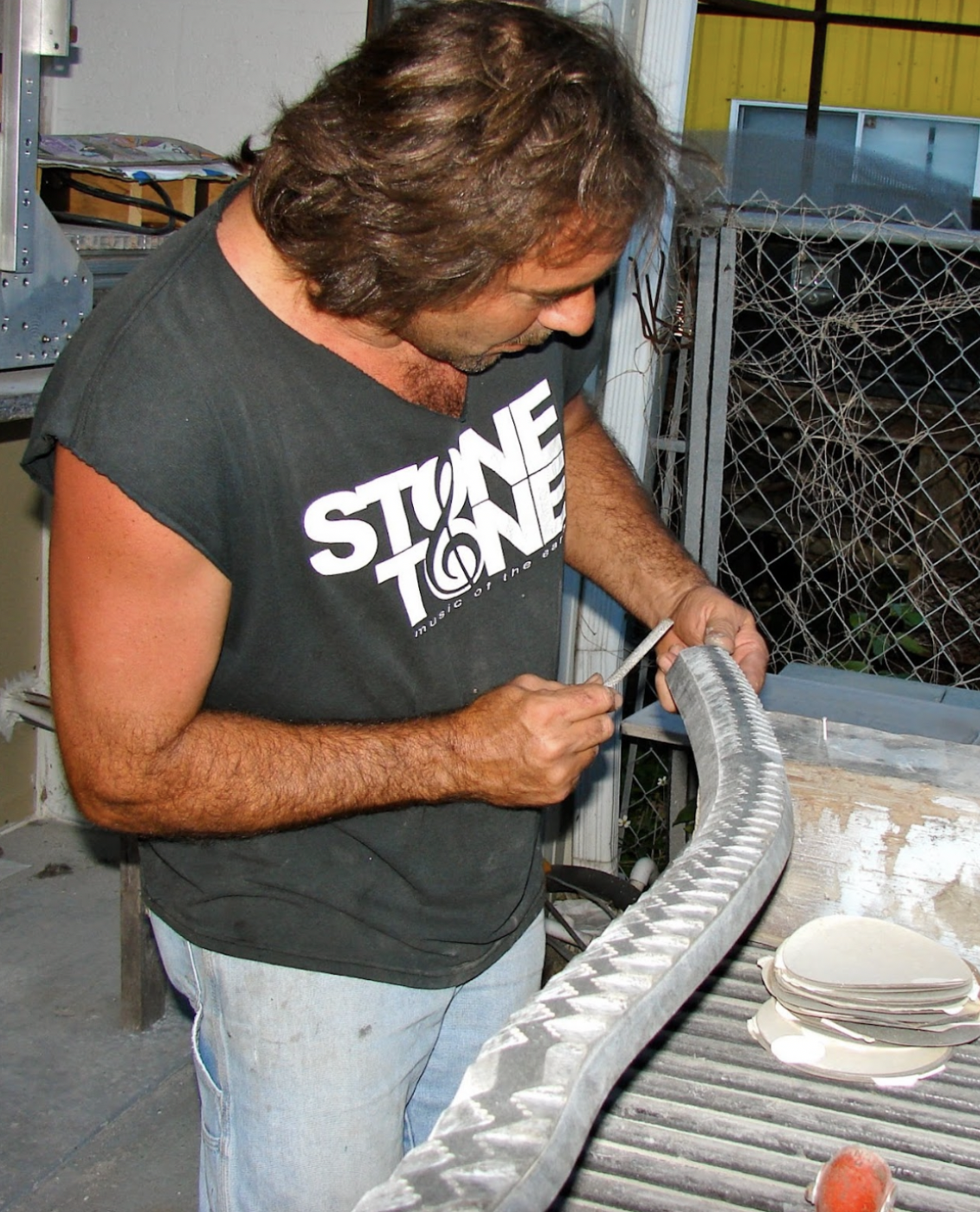