For the guy who has everything, especially too many amps - get an Eggie SS-4 Amp Switcher. Purchased from Ultrasound. It came without a manual, but I emailed Bruce and he emailed me the manual. It doesn't take a rocket scientist, but I wanted to get the MIDI stuff worked out right away instead of trial and error as I usually do.

Anyway, the unit is worth its weight in gold. Well built, solid, totally transparent, dead quiet and easy to set up. Normally, I would be wiring up through several different boxes for layering heads and using multiple amps with their own cabs and having to tote that shit around. By the time I get set up, I am off on another tangent and question the need for running heads together. But, this has opened up a whole new thing in having 2-4 of the favorite heads and a cab or two. Or, set up for use as a W/D/W rig with the line out. It has a built in level control for anything line out so you can control that age old problem right at the unit.

I have it set up now in a simple rig. Just below in the other rack are my Friedman Marsha and Naked heads. Each have such a unique inherent tone, it was a shame to put them together, as something would surely be drowned out. Running them separate was the best thing to fully utilize them. I don't care for FX loops or multi-FX boxes. So, basically, there are a few stomp boxes in front of the amps using the GCX then out from the GCX to the SS-4. Running two 16 ohm Mills cabs for an 8 ohm load. Everything is switched using a DMC Ground Controller for presets and instant access and is a breeze to set up. The most important things is for it to be quiet and to not have any lag time in switching. And, here it excels as there is no lag or noise.

If you have been contemplating isolating your rig and use multiple heads and common cabs, you don't have a whole lot of choices. The market is fairly slim right here between Egnater and Custom Audio and maybe one or two others and Radial. Problem with Custom Audio is nailing Bob down long enough to get his interest and actually build something and follow through with delivery. Trust me though, the SS-4 is a fine piece of kit and highly recommended.

Here's a couple of tidbits of info I wanted to find out before buying. It will phantom power a MIDI controller with a standard 7 pin MIDI cable. It can be controlled with "program change messages" or "CC" messages from a controller. It also has a 9VDC phantom power plug for use with a Rocktron controller or similar. It comes set up to read MIDI on channel 1. But, you can pop the hood and use the dip switches if you want something different. You can also switch manually, but that isn't very cool.

Lastly, Bob is a good guy and nearby if needed. Hey, just realized I don't have an Egnater amp...

Here's a shot of it in the rack.

Steve, Nice review, you have a killer set-up. would you mind posting the manual as a pdf?

The SS4 will can also be used with a combo amp in the mix,or out to all combo amps. I run 3 heads and a Mesa Mk III combo. With the combo I cant run my wet out of the level only because I just "send" to the input and do not have it wired up like my heads. Great unit, dead quiet and transparent.

have had one for years, great unit, does exactly what it should.
A

The SS4 interests me as the Radial Headbone doesn't like time-based effects in the loop of an amp. It seems this is because it only has sufficient load for the inactive amp when it is completely inactive eg no delay pumping the tails of a guitar note into the loop.

Does anyone know what load the SS4 has?

I have also heard of small delays when switching with the Radial, and it not liking to switch between two high gain amps.

Any info in this regard for the Egnater would be gratefully received.

The Egnater SS-4 is a limited run 1 space rack unit. It switches the load up to 4 amplifiers between single cabinet inputs. Its features are 1 Guitar input, 4 outputs to amplifier inputs, 4 inputs for amplifier speaker outputs, Ground lifts, MIDI input and thru.
I found this information from internet, does someone has SS-4 product manual?
S

Thank you for all the info on this unit, it look like a great alternative to cae amp selector

i have the cae and the ss4

Hi every one i need a little help, i have a question about the egnater ss4 if any one could help me; i check the loads in the amplifier outputs and the output that is in use have the correct load from the cab, but the other ones download the ohms

These are killer! I love mine. 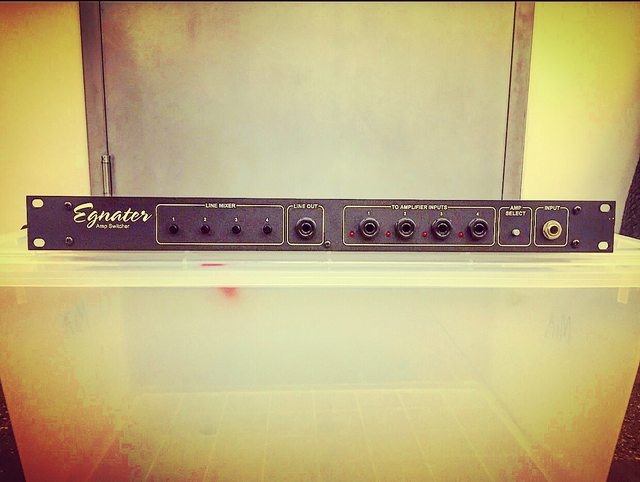