So I shipped out a Mesa 2:90 a month ago. It was in a rack, I put bubble wrap in between the tubes, bubble wrap between the rack and the cardboard box it was in. A week after I ship it I get a “ bad pack job dude” message in EBay. I asked what happened! The buyer said broken tubes, glass everywhere, tubes loose in the box. I thought that was impossible since the rack would close up tight to the back of the amp not allowing tubes the fall out, and the rack zipped shut, how the hell could the tubes be outside of the rack case. I get 1 word responses to any question I asked and he sent me 2 close up pics of broken tubes. I said to send me pics, I said it was insured, I repeated several times to SEND ME PICS. I get no pics, then nothing. No communication, no messages. A month goes by and yesterday I get a return request. The guy said in the claim he bought new tubes, it doesn’t work, and claimed it wasn’t as described.

I say in the claim to again SEND ME FUCKING PICS! But I’m guessing the idiot isn’t going to do shit at this point. I opened a claim with ups, when he should have, and what they want for the claim looks impossible from my end. They want the original packing, materials, everything. The fact that this Ahole sat on this for a month probably means the box and bubble wrap I shipped it in is long gone.

What else can I do beside close my eBay account and remove my bank info? Such BS that this guy took it upon himself to buy tubes instead of immediately taking pics and filing a claim. I’m soo done with shipping amps!!!!

USP = animals. They are criminal when trying to get insurance money, it took me months and about 40 hours on the phone. They "lost" a Boogie 4X12 RR cabinet!!!!
R

Scam. If he’s not willing to provide pics, he’s full of shit and I’ll bet he won’t send your amp back. I’ve had this happen once on eBay and once on Reverb. Sucks. Sorry man. I’d probably shut everything down; fuck him. The ‘tell’ for me is his complete unwillingness to send you pics of the damage or do anything to help with the shipping claim.
G

I sold an ADA MP-1 3TM to a guy in Canada that did the same thing - ended up being user error. It was easier for him to keep it and give me a negative rating than it was to return it. After receiving the negative rating I removed my eBay account and started over. People are dicks. He should have contacted you immediately as soon as he saw broken glass. There’s a very small chance unless you took many pictures of your own packing job that you’ll win the case. You’re likely out of the money and getting a broken amp back if at all. When this has happened in the past, they never pack it well for return inciting further damage such as bent rack ears. Total and complete BS. I’d ghost his ass and start over before I deal with that headache.
B

You're actually the UPS customer, so it's up to you to initiate the damage claim, as UPS failed to adequately provide the service you paid them for. Generally though, even if you insure something for the full value, you're letting UPS off the hook if you pack the item yourself. Their fine print gives them exclusive discretion to deny a damage claim unless they packed it.

With anything I sell on Reverb/eBay, I take photos of the item and packaging as I pack it. With more expensive items, I also do a video playthrough right before I ship it. My listings also have the fine print where buyers have to retain all packing materials, report any problems within 72 hours, and cooperate with the carrier in the event of a damage claim. I've almost never had a problem, but I've made it really easy for eBay/Reverb/Paypal to side with me when I do encounter a douchebag buyer. I'm as much of a gear whore as any of us when it comes to buying and selling, and in 20+ years of doing the online thing, I've never lost a dispute.

Best wishes in any case

Fuck man, that is so fucked up. Too many POS's in this world

Devin said:
Fuck man, that is so fucked up. Too many POS's in this world

Yep, all it takes is one. I had hundreds of positive transactions on eBay; then got the “attempted” scam. Shut it all down.
Reverb, probably 50+ positive then another attempt at a scam...shut it down.
Sucks

The claim should be filed by you, since you paid the postage. The buyer does ned to cooperate though. It sucks that you have to go through this, but unfortunately you're probably boned here. You can fight but it might not be worth the stress, do the return and take it on the chin. Get the amp back in your hands before doing any further exchange of money, if possible.

That sucks. I have been using Facebook marketplace or Ebay with local pickup only for tough to ship items. It's worked out pretty well. On Ebay, I always assume there's a risk I'm going to get beat out of my item, or at least some cash so I avoid high value stuff sales on there. Is I also stick to Reverb when I can. If you buy a label through them with their protection, I believe your pretty much covered if anything happens.

Received this a few weeks ago from UPS. Kinda makes me think someone did it on purpose just to be a dick Luckily no damage inside 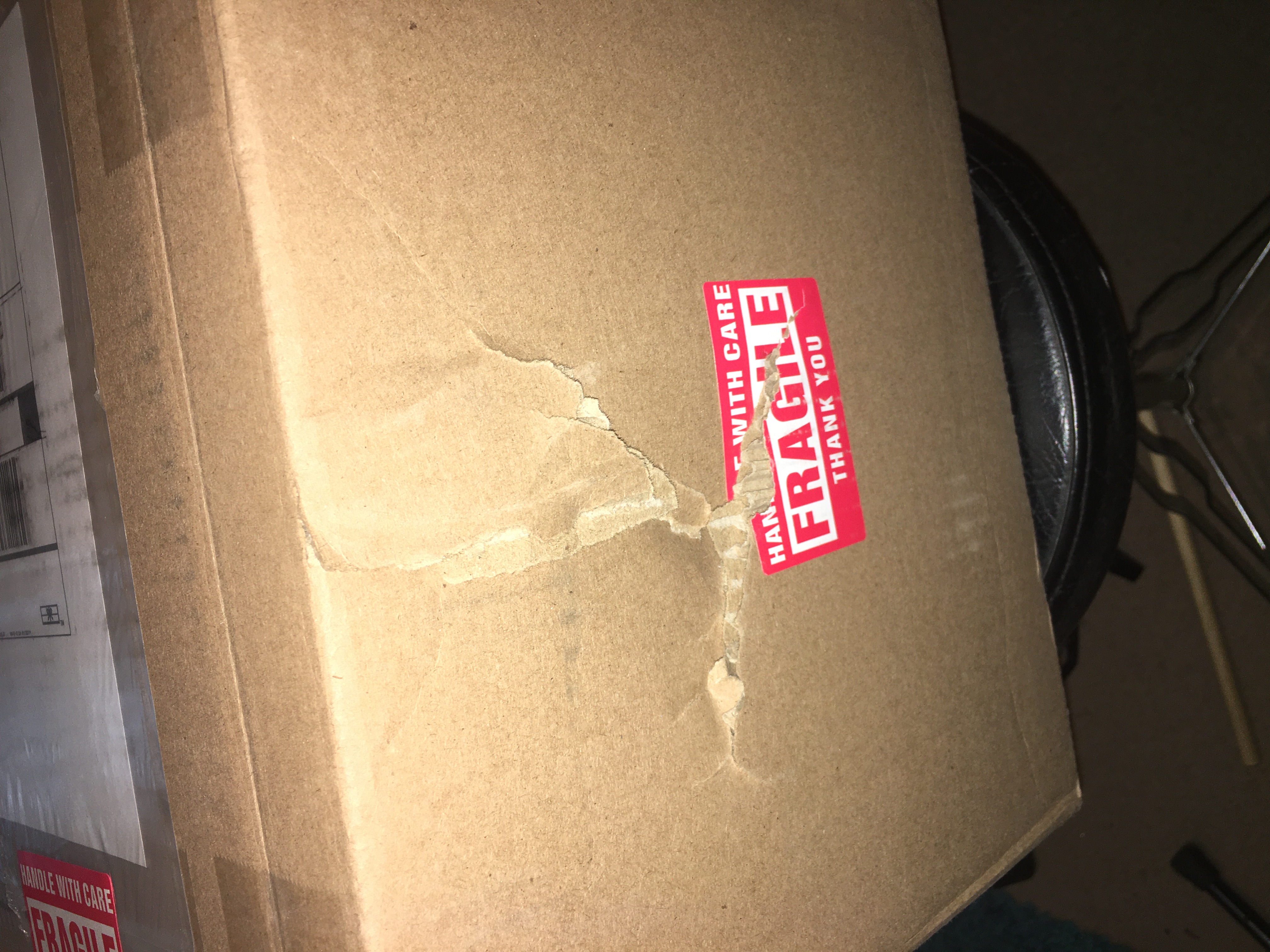 I work in shipping & receiving at my job and some of the packages that show up are crazy fucked up.
It's amazing that anything makes it one piece at all
M

I don't even bother selling on eBay or Reverb, and half the time I don't even bother trying to sell/trade locally because of all the fucking idiots that exist that either don't know what they're doing or just want something for free.
H

Sounds like he probably poached your tubes if they weren't actually damaged in shipping since he did not file a claim and send pics right away. He probably played it for the month knowing he could pull this shit up to 90 days after taking receipt of the amp.

As Racer said, if you refund the guy his money there is no guarantee that he will ship you amp back to you, there was another RT member that this happened to and the asshole even used his pictures to relist the power amp on EBAY after the refund was issued.

As far as I know the amp was never returned and the asshole got the refund because he had bought it using a paypal credit card.

At this point I would have a difficult time selling anything large and of value at this moment in time, the scammers are going fullbore out there and even have the rules in their favor. Good luck danyeo I hope things work out.
P

I stopped selling on Ebay and shipping stuff too. Its not worth it anymore, the biggest problem is the dirtbags out there more than the shippers. I now consign gear to a local shop and let them deal with it. Yes, I lose out on some money, I guess I'm ok with that.

Personally, I wouldn't move on a claim until the buyer provides me with clear pics and clear communication. It would have taken minimal effort for the buyer to take pics. What an asshat.

petee said:
I stopped selling on Ebay and shipping stuff too. Its not worth it anymore, the biggest problem is the dirtbags out there more than the shippers. I now consign gear to a local shop and let them deal with it. Yes, I lose out on some money, I guess I'm ok with that.
Click to expand...

Yep. I am 100% local on deals now on anything amp/guitar. I will still ship pedals and pickups and other hard to break smalls....but nothing else.

imzadimark said:
I work in shipping & receiving at my job and some of the packages that show up are crazy fucked up.
It's amazing that anything makes it one piece at all
Click to expand...

It's a jungle out there! Here's a POD I recieved a few years ago. The thing was freakin metal! It looked like it got speared with a forklift. They denied the claim BTW. I never got my money back. 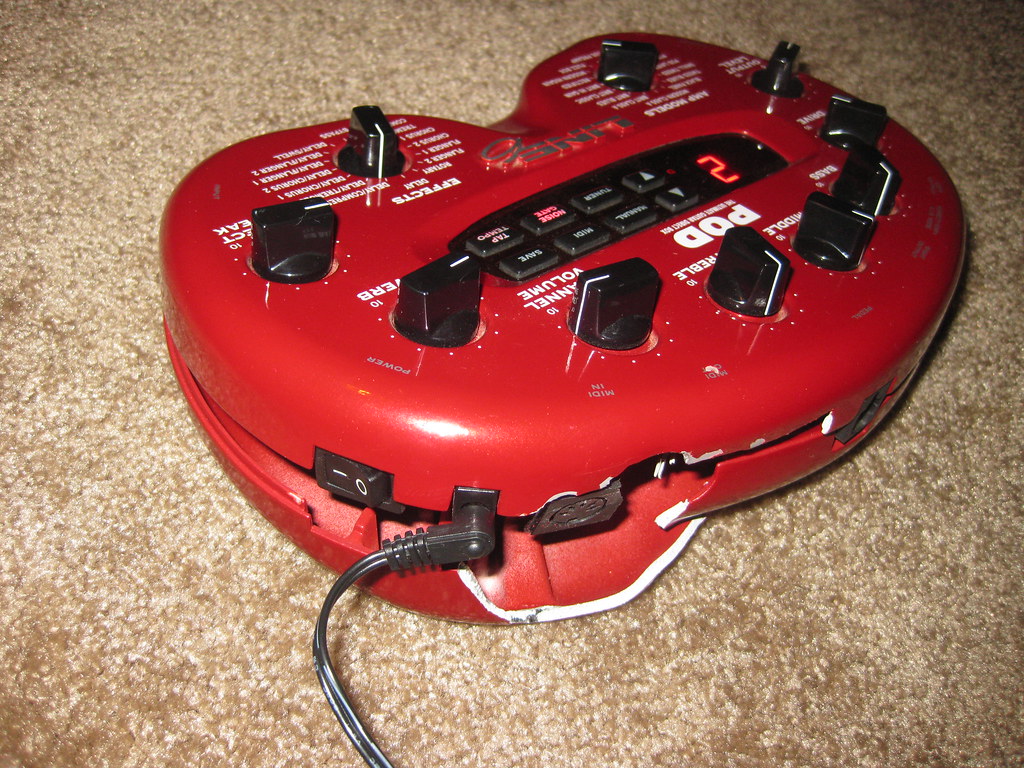 Had a UPS driver drop a package when he was loading and ran over it with his truck. He brought it on to me, so he admitted it was his fault, but they denied the claim because it wasn’t “packed well enough”.
i’m not sure how to pack something that can withstand a ups truck crushing it.
You must log in or register to reply here.
Share:
Facebook Twitter Reddit Pinterest Tumblr WhatsApp Email Share Link
Top