Who's got the quad cortex?

Mine will be here Monday...

Test bench.
I'm no @Crunchity but it's a nice ride. 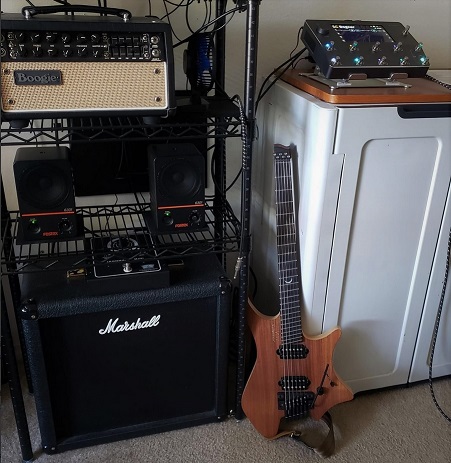 JerEvil said:
Mine will be here Monday...
Click to expand...

RevDrucifer said:
TGP is the unofficial forum for Helix fanboys.
Click to expand... 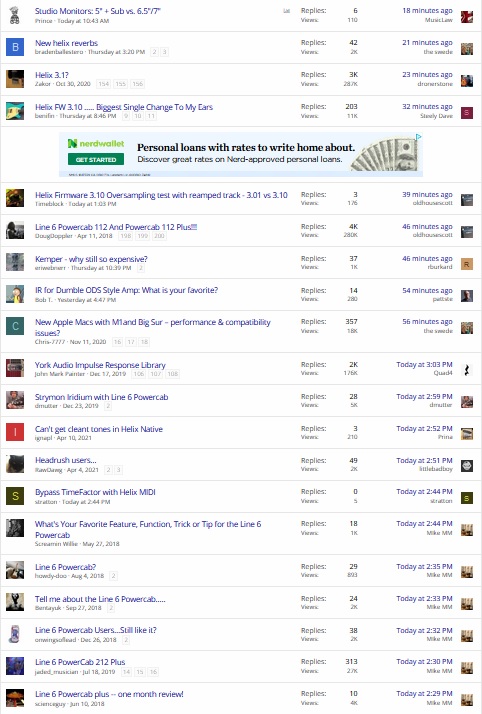 It will be even more so with helix 3.1 just dropping. FWIW, it’s a nice update and definitely improves the sound in a noticeable way.

Settled on 8 crunch to lead presets. Each has the same signal chain for continuity sake.

No IRs. Everything's EQd to the monitors which is working insanely well.

Except for the comp settings, everything came stock on the unit. The models so far
are 50/50 - all the Marshalls are superb though!

Important to note that control of the amp is dependent on model or capture.
Models mimic the amps while captures are all the same; gain, master, and T-M-B
all stock at 0.0 and then you boost/cut to taste. 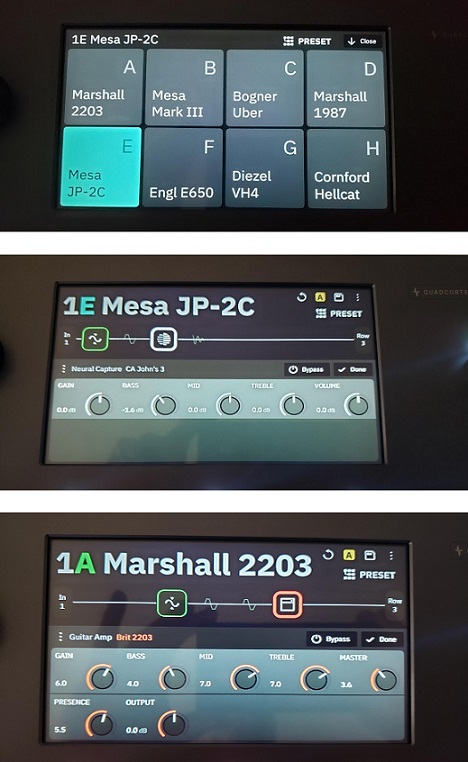 Capture blocks (files) are just like Kemper. Some amps have 4 captures and some 8.
So far I'm been able to find at least one really good capture of all the stock options.
VERY impressed with this so far and looking forward to doing some cloud browsing.

This is so easy with their mobile app. Browse presets and captures and click any faves.
Turn on the Quad and your faves are waiting to be downloaded.

Editing is very fast. Hit a note and using your pick hand tap the screen with a
free finger - takes literally less than a second when your in fine tuning mode. Same
goes with backups. 3 taps and a few second pause and you're cloud is updated.

Extremely impressed but waiting on some future software refinements to streamline
some stuff.

Do not plan on spending serious time with one of these boxes unless you're wallet's
stuffed.

All running for the past hour and the box is cool as a cucumber.
We don't need no stinking internal fans in the 21st century! 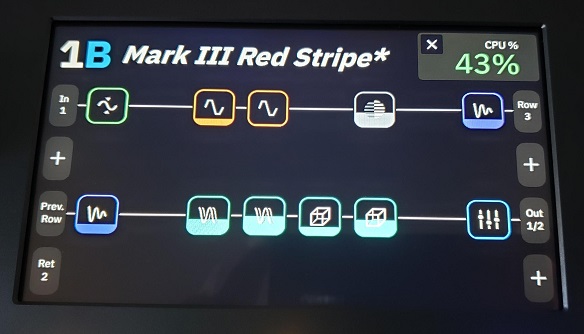 The flanger in this video made me laugh out loud. It's so hilariously bad.

I know the Neural design guys have been on vacation but I'll expect a very improved
firmware update sometime in May or I'll be a bit pissed. It's obvious the focus must have
been more on getting the hardware ready to ship (reliability testing, agency approvals, etc.)
the past few months and not on really dialing in the FX or modeling a bigger variety of amps.

That said, that guy needs to get the unit up on a desk and really dive in a bit more. Most of
the stuff he's finding time consuming is just because he hasn't figured out the right way to
do it yet - even pro reviewer Paul Davids mentioned a perceived flaw in his review that is
totally bogus.

The thing is so plug and play that I think too many aren't RTFM enough.

The chorus sounds were also quite shit in that video as well. That’s the exact kind of shit that makes me want to sling mud at them. They hyped that thing up so much and can’t even nail quality effects upon release? Never, at any point in time, should you be able to get a better basic guitar effect out of a $200 Zoom or Line 6 pedal than you can a $1600 “most powerful floor based processor in the world”.

They admittedly spent most of their time working on the app before releasing the thing and the app seems to be trash. When even the die-hard, “QC is going to make everything obsolete” guys are saying the app sucks, it must suck. There were 4 cancellations in just the main TGP thread alone and they were all due to the thing being underdeveloped.

Someone else summed it up quite well-

I'm canceling my order for now. That's all. This thread is simply a portion of the feedback I've observed on Facebook, YouTube and elsewhere that has influenced me passing on it for now.

The "waiting at least 7 months" is irrelevant to the discussion for me because I was prepared to wait however long it took to come out if I only had their (and associated influencers) pre-release videos and virtual device list to go on. I tried my damnedest to grab a Tier 1/2 pre-order slot when some of those people canceled. I had my money lined up for Sweetwater, and was quite excited to pay at the earliest possible opportunity.

In the interim, some concerns popped up that dampened my enthusiasm. You say Cloud metadata won't be a factor to you, but that's a big part of the experience for me. Reading upload after upload of nondescript, vaguely-labeled captures of varying volume levels and configuration is not the "elegant" experience I had come to expect. There's no way of knowing what you're downloading most of the time. Managing the captures on the device from the first-hand experiences I read here and the FB groups sounds like a cumbersome chore. The people I was looking forward to buying from are hamstrung by the lack of a viable marketplace. It's too close to chaos for my taste.

Neural also seems to be a step behind, development-wise, even reading Doug's update here this morning. I love that they're actively engaging and listening to feedback, and I truly believe them getting up to speed is their number one priority. That being said, even a lot of what's in there now - such as chorus/flanger/phaser mod effects - seem to need work. I'm not really a huge user of mod effects, but I DO use them.

In short, a team that's been chronically late on delivery timelines now has to add missing effects/pedals/amps, flesh out underdeveloped existing effects, completely revamp their Cloud user experience, develop a desktop editor, stand up a capture marketplace AND shoot down any and all associated bugs. And that's just to get to the 1.0 status they promised when they launched the device! That's a lot even for a team firing on all cylinders to nail at the same time.

I do believe Doug and the team will get there at some point down the line. But I'd be lying if I said I believed it would be "soon". Buying a QC now just to drum my fingers waiting for "soon" doesn't make a lot of sense to me. Right now, it's a fun-to-use great-sounding device in a compact form factor, but I already mostly have that with Helix and FM3. I wanted QC to bridge the gaps between the two, and it's not there yet. When it is, I'll be waiting...
Click to expand...

They’ve got a LOT of work to do to even get the thing operating at it’s basic, advertised level. Hell, that guy didn’t even mention getting theIr plug-ins to load into the thing. I know at one point, NDSP was a 10-man operation. I’d really hope he’s brought on some help to actually get it going.


Really looking forward to your feedback!
Click to expand...

How are you liking the Mark V 25? Love the grill on yours!

I have been digging the QC personally. YES... it needs some time to mature, but most of my gripes are small. I posted a clip in my thread about it.

RevDrucifer said:
The chorus sounds were also quite shit in that video as well.
Click to expand...

Thats on him. The Vintage Chorus is awesome as is. Can get classic Lifeson easily.

[ Donnie B. ] said:
Thats on him. The Vintage Chorus is awesome as is. Can get classic Lifeson easily.
Click to expand...

Yup. I like both Chorus modules. I got a ripping Andy LaRocque tone with the JCM900 and Dual Chorus.

JerEvil said:
Yup. I like both Chorus modules. I got a ripping Andy LaRocque tone with the JCM900 and Dual Chorus.
Click to expand...

Man they NAILED the Marshalls!

[ Donnie B. ] said:
Best demo video yet. Broken into sections.

That was indeed the best one yet! Lots of great tones in there!

Hooked up the Duncan Powerstage this morning to a 1 x 12 open back loaded with a Scumback 65.
Have the Quad outs with 1 and 2 in stereo going to the Fostex's and out 3 going to the Powerstage/Cab.

The QC with this sounds great! My room is only 120 sq.ft. so it's plenty loud. 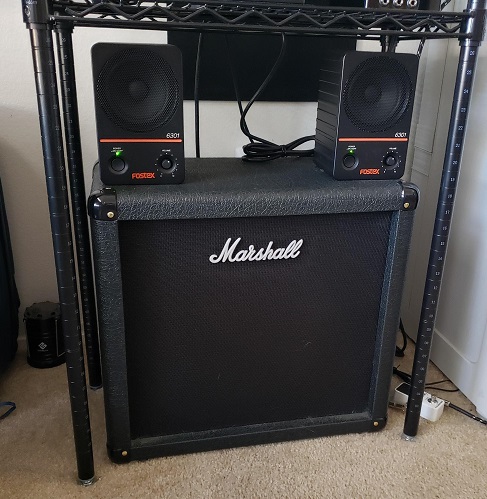 @psychodave If you were being serious:

Not set up to record. Very cool so far but already waiting for the first big update.
Being a first adopter means running into some pretty obvious bumps early - at least
in most cases others have reported the same shit.
And Castro has been staying active in the threads saying an upgrade is being worked on
to address stuff that's legit problems.

Excellent unit and so far I'm not missing any amps - so that's all that matters.

[ Donnie B. ] said:
@psychodave If you were being serious:

Not set up to record. Very cool so far but already waiting for the first big update.
Being a first adopter means running into some pretty obvious bumps early - at least
in most cases others have reported the same shit.
And Castro has been staying active in the threads saying an upgrade is being worked on
to address stuff that's legit problems.

Excellent unit and so far I'm not missing any amps - so that's all that matters.

It’s going to be really interesting to see how they respond to the current issues that are being reported. Are you experiencing noise in your headphones as well that only goes away if you touch the unit or plug something into the XLR’s? That seems to be an issue with quite a few people, just like the USB recording adding artifacts and making recording impossible for quite a few on the NDSP forum/TGP. They’ve got a lot of catching up to do WHILE fixing these bugs.

It’s been interesting seeing people reporting bugs getting torn apart in forums. One guy over on TGP posted several issues in a thread which was proceeded by other QC owners attacking his character for 3 pages (which carried into another thread) while only 2 people actually took time to discuss the issues he reported; one of them agreeing with him and the other doing it just to insult him more. They were all issues that have been reported on the NDSP forum, so the guy isn’t alone. That’s the kind of shit that makes me curious about what’s REALLY going on with the thing; when self-worth gets attached to gear, those who are measuring their self-worth with it will never report the bad shit, they’ll only say how good it is. And all those 3 pages of character attacks did was tell me that the current TGP user base has attached a fair amount of self-worth to the thing at this point, so they can’t be taken seriously.

There’s a whole new Cult of Q out there.